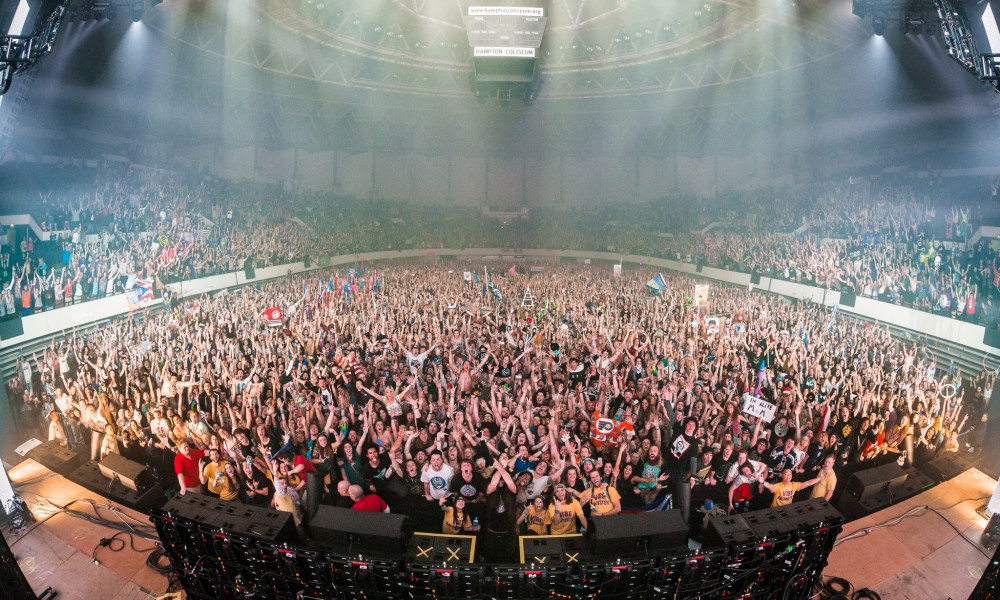 With a capacity to hold almost 10,000 people, the Hampton Coliseum of Hampton, Virginia has certainly earned its nickname as the revered “Mothership”. The circular dome stands as main venue to house the illustrious Basslights, a two night event curated by Pretty Lights and Bassnectar wherein the two play back to back sets both days, switching into the closing set position each night. The two are known to put on quite a show, with Bassnectar’s on-the-fly sampling/visual mixing and Pretty Light’s analog sythensizer sound and immersive stage lighting courtesy of long-time collaborator, Lazer Shark, the expectation from their die-hard fans is staggering. The night sported two openers, each catered to that night’s headlining artist, with Marvel Years and Manic Focus opening for the Pretty Lights headlining night and Son of Kick and Break Science opening for Bassnectars second night closing set.

This year’s immense stage depicted the perfect balance between the two artists, with large stage area and screen for Bassnectar to project his visuals onto, and crowned in multiple rows of piercing lazers the stage took on an incredible form. During the first Bassnectar set on night one, he opened with the Imperial March from Star Wars, taking in full advantage of those visuals by depicting the rise of Darth Vader’s Star Destroyer looming over the crowd. This perfectly synced up with the recent movie release, sending the crowd into hysterics before bombarding the crowd with fan-favorites such as Boombox, Ping Pong, and recent release, Generate. He also released a mashup of You and Me and Can’t Feel My Face from The Weeknd, taking a totally new direction with the hit single. This powerpacked setlist set a high-octane tone prior to the Pretty Lights headlining set, with everyone preparing to settle down and weather the color storm of lights spewing from the stage.

It came as a surprise, however, when Pretty Lights announced his use of a full-analog synthesizer box for the show, meaning the curating of the entire set-list done by hand. His performance of Understand Me Now took the crowd out of this world, delving into an array of purples and greens, really setting an intense note for the show. He included other favorites such as the Gold Coast Hustle/Get Em High Remix, Exodus, and a perfectly timed I Can See It In Your Face to close out the night.The inclusion of pillars surrounding the top and sides of the stage were an incredible addition, bringing the stage to another level of intricacy, drawing inspiration from Pretty Light’s Red Rocks stage show premiered earlier this year. During both sets these pillars displayed projection mapping and LED interfaces consistently flowing with the music. This added a cohesive visual element to both sets on both nights. With ringing ears and a bit of shell-shock, the crowd left the Mothership the first day, hungry for more.

The tension was palpable as the hordes of fans flooded back on night two, eager as ever. Crowd calls and cheers came up from the line, even though the Virginia Air was colder than in years past. The hotels had been ringing with conversation and anticipation for the second night, especially with Bassnectar closing out festivities. In stride with years past, the second night has always come with a little something extra as both artists push the final stretch of the two day run. With Pretty Light’s opening for Bassnectar on night two, fans were eager to see how he would set the tone and they were not disappointed as the horns rang out from Forever Lost, cruising into his remix of Run-DMC’s It’s Tricky. During this set Pretty Lights peppered in analog synth mixing and free-styling elements giving the show a theme the likes of a Mad Scientist delving into his work. His set ended to incredible applause after playing multiple new tracks including his collaboration with Tom Morello of Rage Against the Machine entitled, Can’t Knock The Hustle, which features lyrics from Jay-Z. During the final song, the entire building took out their lights and illuminated the crowd for Pretty Light’s track, “Where Are My Friends” casting a warm glow over the scene.

Pretty Light’s buildup was the perfect platform for Bassnectar to take off from and close the second night, which he naturally did in style. Taking off from the down-tempo closing set just played, he began with crystaline synths from Before We Dissolve, building steam during Empathy, and began the climb into a wild break during Noise wherein the crowd became the customary insanity it prides itself on. Continuing on through a very heavy set filled with gems such as the DJ Kool classic, Let Me Clear My Throat and the ever illusive Frog Song with lyrics overlaid during the second drop, the Mothership was at an all-time frenzy topping the weekend off in every way imaginable. Fans of both artists were seen hanging over the railings surrounding the pit, taking in as much of the king of the sound as they could get. The only thought that wrung in everyone’s minds upon his closing out the weekend with a heavy drop into What was how long we will have to wait until this magical event comes around again.

Next stop for the two artists, New Years.