The Avicii team has announced 19 of the original singers on Avicii’s biggest tracks including Aloe Blacc, Adam Lambert, and Rita Ora will come together with a 30-piece band to perform a two-hour headline set of his original music on December 5th.

Produced by The Tim Bergling Foundation, all net profits from the Avicii Tribute Concert for Mental Health Awareness go to supporting organizations which address mental health needs and suicide prevention.

“Tim had plans for his music to be performed together with a large live band, and now we are realizing his dream and giving fans a chance to experience his music in this unique way,” says Klas Bergling, Tim’s father.

“We are grateful that his friends, producers, artists and colleagues are coming to Stockholm to help. They have all expressed a sincere interest and desire to engage in efforts to stem the tide of mental illness and lend their support to our work with the Tim Bergling Foundation. We are very much looking forward to this evening, which will be a starting point for the foundation’s work going forward.”

Tickets for this event are on sale now at Aviciitributeconcert.com. Check out the complete lineup below. 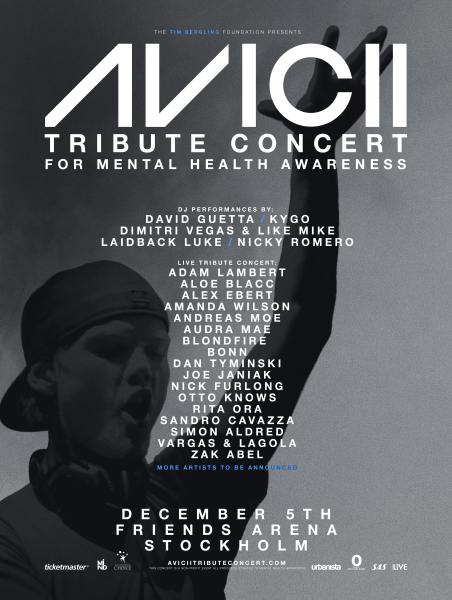