[Event Review] EDC 2017 Was Another Magical Weekend For The Books 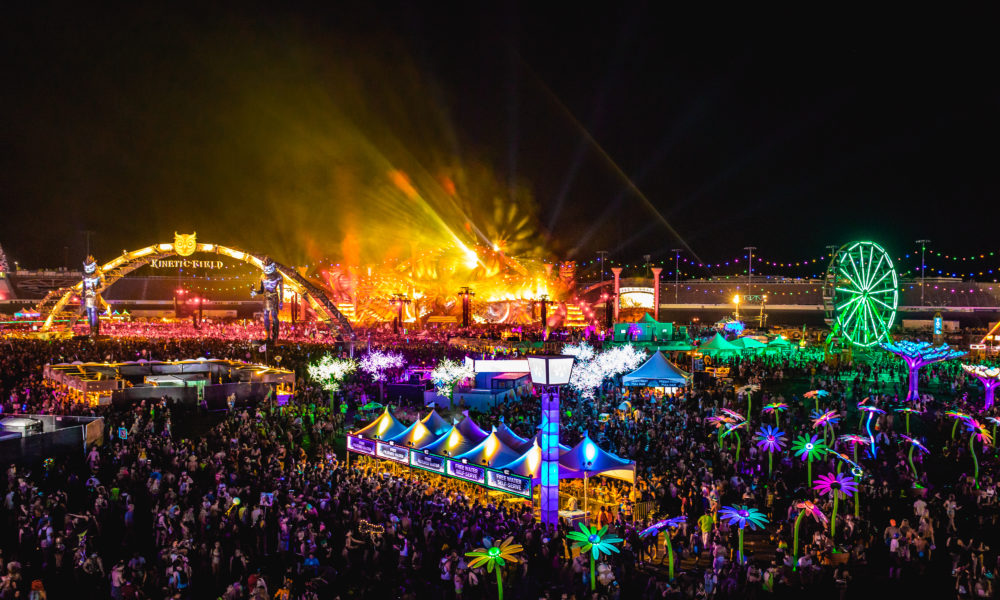 [Event Review] EDC 2017 Was Another Magical Weekend For The Books

Another Electric Daisy Carnival has come and gone, and it was another magical weekend in Las Vegas. Headliners were treated to a brand new main stage, over 200 performances with guest appearances from artists such as G Eazy with Jauz and Rae Sremmurd with Afrojack, plus much more. Pasquale Rotella and the rest of the Insomniac family completely outdid themselves this year creating a world were every one is welcome and all are loved. In honor of the festival’s 21st anniversary, I’ve decided to put together a list 21 of the best parts (in no particular order) of EDC 2017. Enjoy! 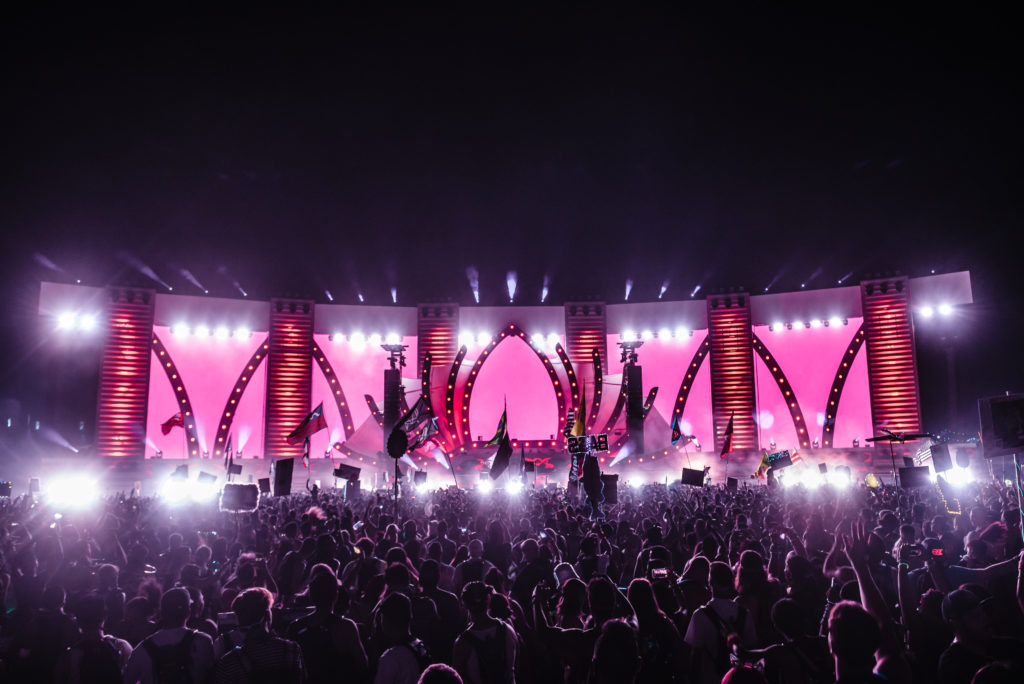 This is my absolute favorite stage at EDC, maybe ever. Sponsored by Audiotistic, Cosmic spread 220 feet wide, stood 68 feet tall with 463 moving lights and 47 lasers. Headliners could dance in the grass or sit in the grand stands to watch performances from artists from multiple genres such as Major Lazer, Slushii, K?d, Black Tiger Sex Machine, Chet Porter, and more.

The dub master took Circuit Grounds by storm. He threw down so hard, thousands of people were attracted to the stage. In fact, there were so many people gathering to break their necks, Circuit Grounds wasn’t big enough to hold them all.

Speaking of Circuit Grounds, it seems that it gets bigger and bigger each year, and we’re not mad at it. With 2,000 (!!) lights, 40 flame units, 1200 pyro units, and some of the rowdiest sets the stage, in a word, rocked. 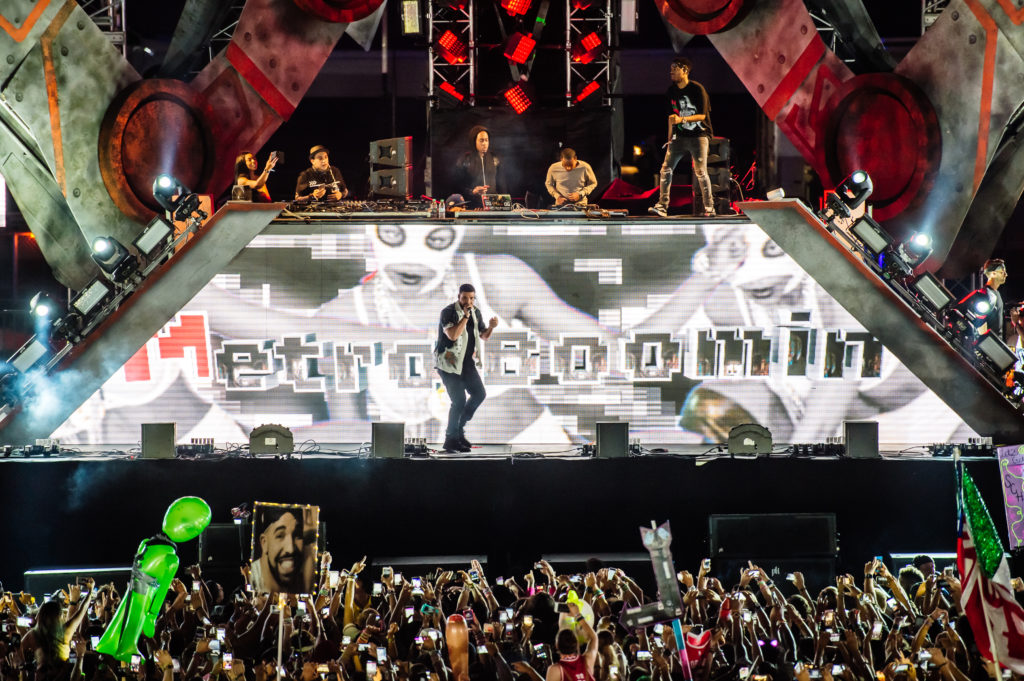 Metro Boomin’ took the Bass Pod stage and brought a very special surprise guest . . . Drake. Together the two blew the crowd away with the live performance of “Fake Love”, making this set one that won’t be soon forgotten.

Another legendary set from the weekend, this massive back to back set is exclusive to EDC, and bound to go down in festival history. Relive the set here! 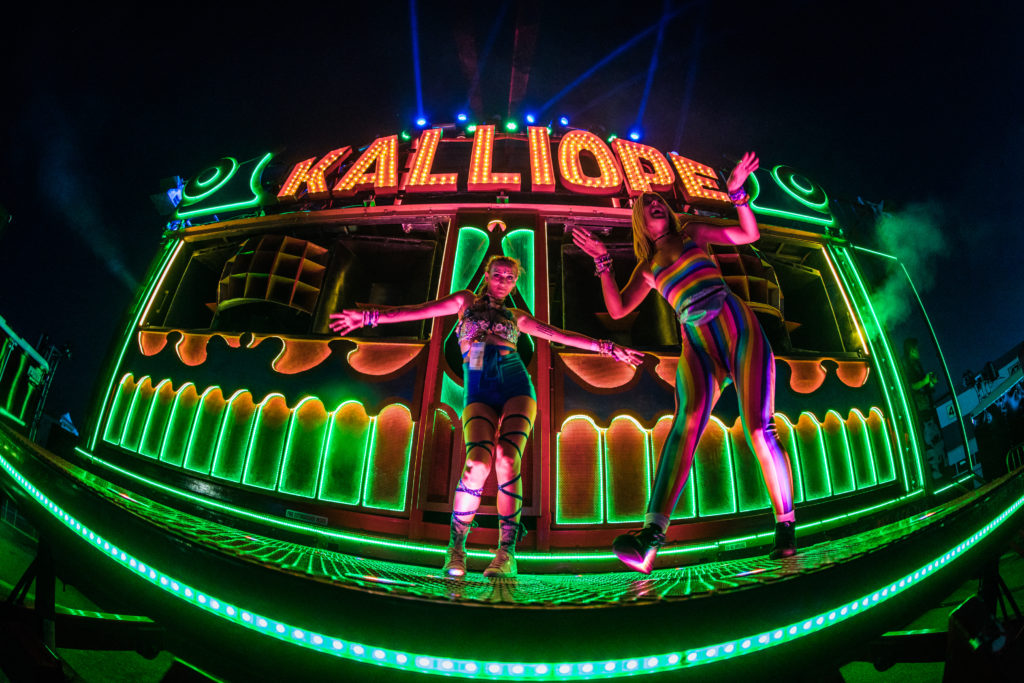 In between Cosmic Meadow and Kinetic Field lied the Kalliope Art Car. Desert Hearts rocked the three-story car Day 1, and Monstercat had their turn Day 2 with performances from Conro, Gareth Emery, Delta Heavy, plus more. Kalliope saw a couple surprises guests too including Kayzo who turned the car into a main stage and an extra special one. . .

That’s right! Kaskade surprised headliners with a spectacular set, cultivating a massive crowd at the Kalliope car late Day 3. A huge crowd came together as Kaskade put down all the vibey beats that make you dance and feel the love. 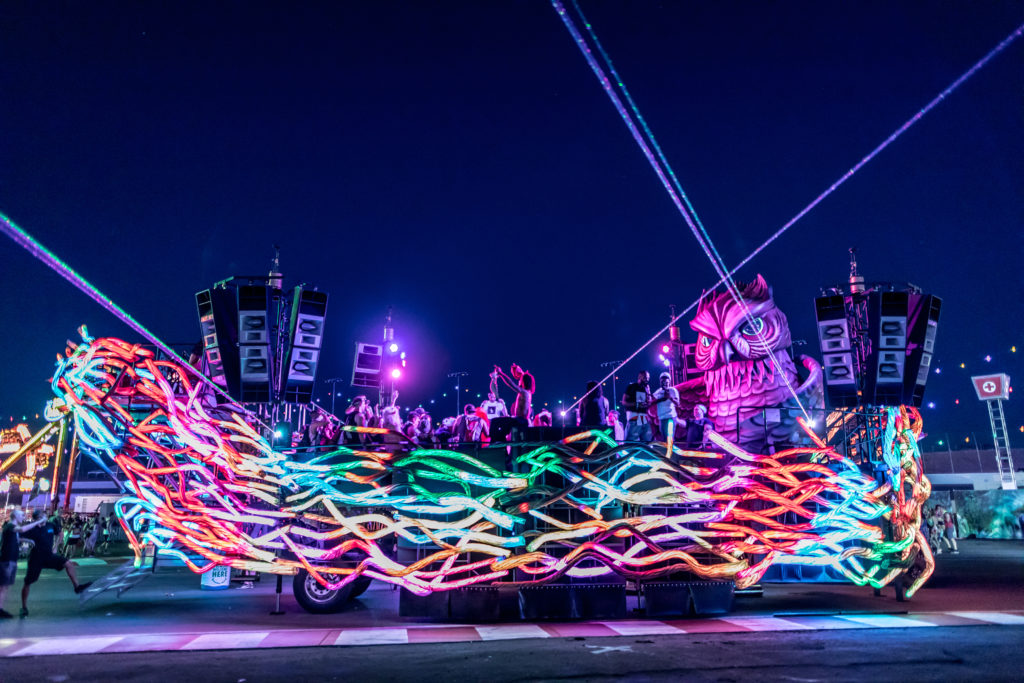 Another incredible art car featured at EDC was the Parliament car. Weaving through the festival grounds with a 16-foot dancing owl, the car hosted sets from artists such as Bonnie X Clyde, Paris Blohm, Troyboi, Taryn Manning and more.

One of our favorites here at TSS graced EDC for the very first time, taking Cosmic Meadow by storm. The genre blending phenom brought her A game for what I’m sure won’t be her last EDC performance. 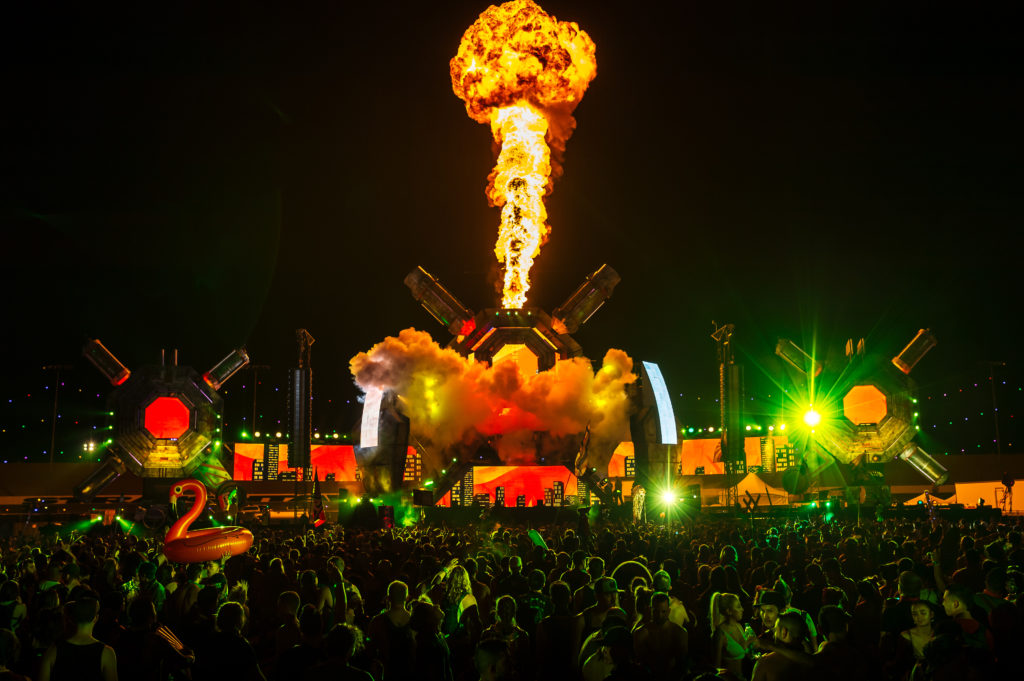 Another favorite stage of mine, Bass Pod, famously caught on fire the past two years thanks to the 180-foot flame features. This year, however, the stage brought all the heat minus the fire incident. GRiZ, Herobust, Flux Pavilion, Borgore and many more brought headliners together from some filthy performances.

Words escape me when it comes to this incredible set. Flosstradamus THREW DOWN. And on top of that, he brought out Lil Jon and Skellism for an epic performance of their single “In The Pit” shortly before a massive mosh pit formed.

This pair lived their dreams and brought the heat to main stage. They dropped 9 unreleased songs, including “Superhuman” (released last Friday), and brought out Kayzo, SAYMYNAME, and NGHTMRE for the special announcement of a huge Gud Vibrations show at the NOS Center on July 29th. 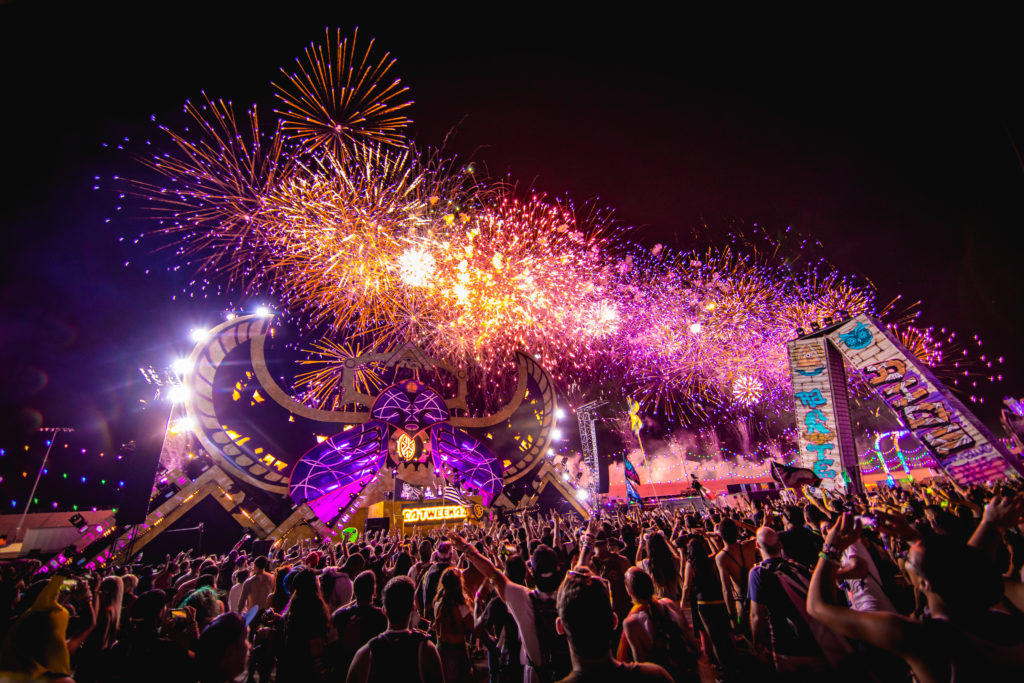 Wasteland is a stage that many headliners look forward to every year, eager to see what Insomniac has imagined next. This year, hardstyle bangers played across an Egyptian dystopia featuring 400 pyro units and 260 moving lights. 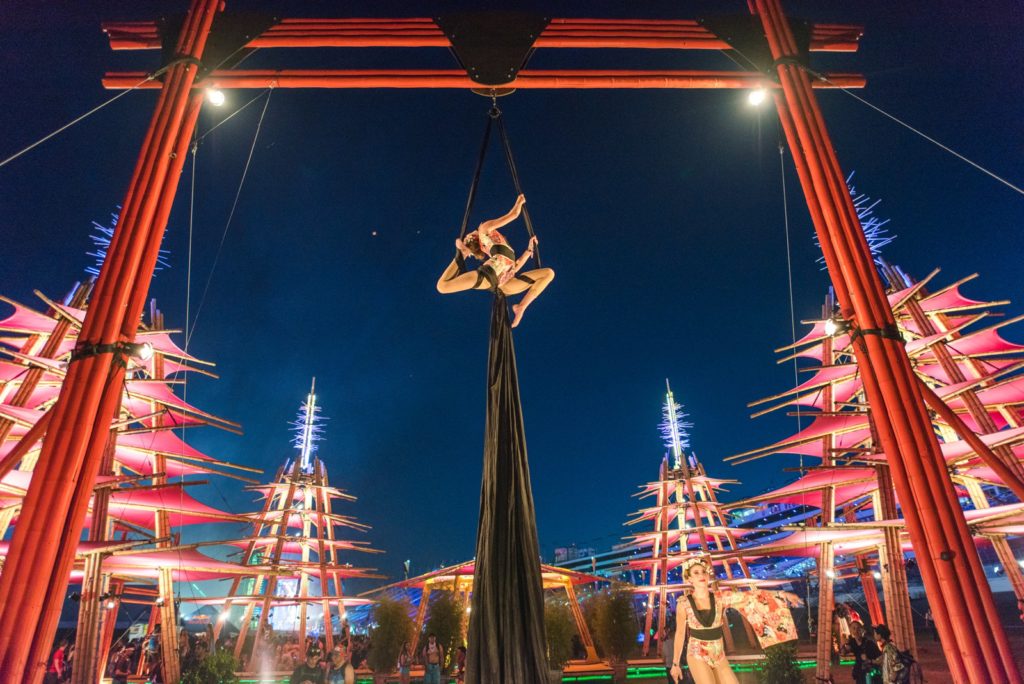 New to EDC this year, these beautiful bamboo towers were a prime spot for festival goers to relax in between sets. Headliners could be seen stretching out, trading Kandis, and even practicing some yoga in this Zen new feature that will hopefully return.

Personally, this is one of the sets I was looking forward to the most. After the success that followed the release of their flawless album, Los Amsterdam, it was no surprise that Yellowclaw absolutely killed it at Cosmic Meadow.

If you haven’t seen Axwell ^ Ingrosso then I highly recommend you do the next time you get the chance. These two put on a memorable show with equal parts bangers and vibes. But the highlight had to be when they played the classic “Sun Is Shining”.

Another artist I’d highly recommend you see, RL Grime, returned to EDC this year but this time took Circuit Grounds by storm. With a cinematic production, an equally cinematic track list, and a special surprise from Miguel for their collab “Stay”, this set was one for the books. 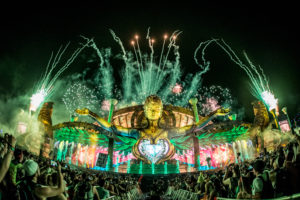 EDC is always pushing the boundaries with their stages and Kinetic Field was no exception. The Gaia themed main stage welcomed headliners with a warm hug from Mother Earth that spread 446 feet wide. On either side of the beautiful stage stood two 48-foot-tall owls. This stage was truly breathtaking and reflective of Insomniac’s message of LOVE.

One of my favorite sets of the weekend was Dillon Francis. After years of dreaming, this legend finally got to take main stage and he held nothing back. His set was riddled with bangers and new moombahton, but one the highlights for me was when he dropped My Chemical Romance’s “Black Parade” for an epic sing along. 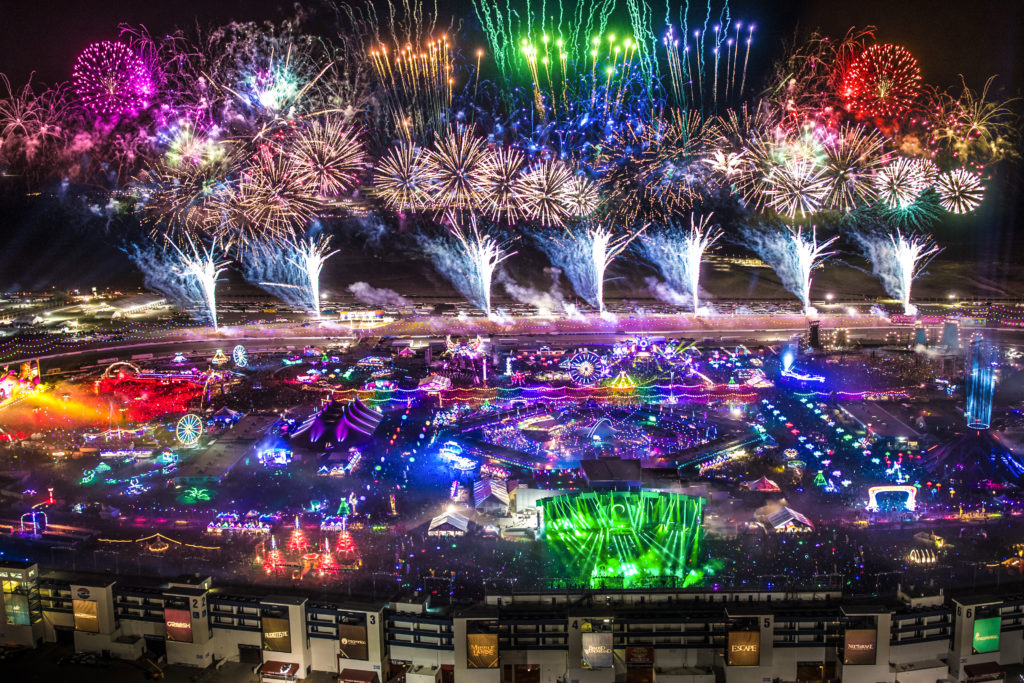 WARNING if you watch the firework show at EDC it will ruin fireworks for the rest of your life. Every night about 1:30am, the most spectacular display of lights shoot up into the sky leaving all who witness in awe. For the big finale on Day 3, the letters E-D-C lit up the sky for a bittersweet end to one of the best weekends ever.