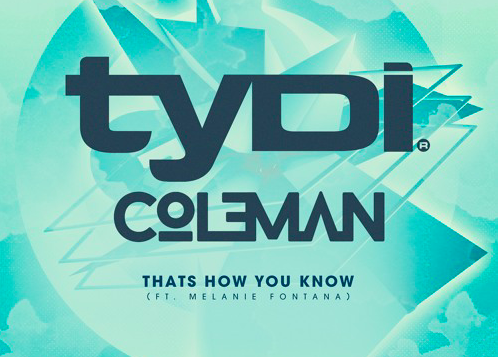 TyDi knows it’s not always bad to repeat the past, especially when it comes to great music. His newest collab with Col3man, “That’s How You Know,” features vocals by the very talented Melanie Fontana but this isn’t the first time her hypnotizing voice has been featured on one of TyDi’s tracks. The two previously worked together on his 2014 hit “Redefined” and we have no doubt that “That’s How You Know” will bring them just as much success.

“That’s How You Know” is the heartfelt, relatable track we’ve all been waiting for. The new song, released today on Thrive Music, has an infectious beat and emotional lyrics, leading to what’s sure to be imminent success.

Regarding his new collab, TyDi said, “This is a really cool one as I’ve done so many amazing things with Melanie Fontana like Redefined but found COL3MAN in a remix competition of mine. It’s like the past meeting the present, to create the future. I can’t wait to show it to all of you.”

TyDi And Col3man (Feat. Melanie Fontana)- That’s How You Know | Stream on Spotify |

Take A Trip Courtesy Of Ye. & Squired’s “Gloss”
MAKJ and Max Styler Team Up For “Knock Me Down”