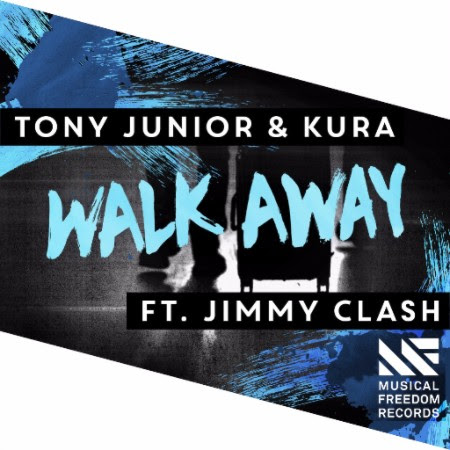 Out now on Musical Freedom is a huge tune by Tony Junior, Jimmy Clash and KURA called Walk Away. This new collaboration hits you with humming bass and melodic tones. The massive breakdown collides with heavy synths and kick drums, before leading into a subtle, more harmonious bridge.

A multi-faceted music and reality star, Dutch-native Tony Junior’s passion for music has taken him all over the world, playing throughout Europe, Asia, South America and the US. With primetime slots at clubs and festivals such as Tomorrowland, Mysteryland, Pacha in Ibiza and Ultra Music Festival, Junior closed out 2015 with the epic Musical Freedom release Get Down, featuring label boss Tiësto. Junior has been continuing the momentum this year, with a mix on Musical Freedom Radio and his most recent single, FaceBased.

Hailing from Portugal, KURA is a star on the rise. At the age of 28, the producer has been ranked in DJ Mag’s Top 100 DJs the last two years in a row, reaching as high as #42 in 2014. Influenced by the likes of Hardwell, Axwell, Nicky Romero and Alesso, the determined young producer has previously had releases on Revealed, Spinnin’, Protocol, and Armada. Most recently, Kura released the #1 Beatport charting single Calavera with Hardwell, bringing his musical influences full circle.