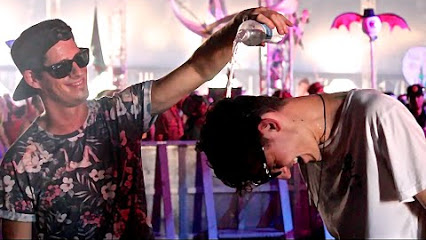 Saxophone dynamo’s Big Gigantic and GRiZ seem to be cooking up something smooth for tomorrow, as Dominic Lalli and Grant Kwiecinsk recently shared a short clip of their, soon to be released collaboration, C’mon. The clip depicts a phone conversation between the two in which both artists play snippets of the tune, alternating riffs from their saxophones. Upon high-fiving at the end of the short, an act common in their well-known friendship, artwork is depicted similar to that of the recently released single The Little Things featuring Angela McCluskey. This could lead us to believe the tune will be included upon Big Gigantic’s Upcoming album, or the song could just be another collaboration to add to the two group’s existing list of collaborations.

After their recent show as the famed BigGrizMatik alongside fellow collaborator Gramatik, the hype for this collaboration is too high. The groups are set to play shows this weekend with Big Gigantic traveling to Bonanza Campout, and GRiZ playing at both Bonnaroo Music and Arts Festival and Mysteryland USA. Give the preview video a look and judge yourself. Also check a list of prior collaborations from the two groups below, you won’t be disappointed.

Other Collaborations Between Big Gigantic and GRiZ-
Good Times Roll
How It Ends
Power
Mr. B