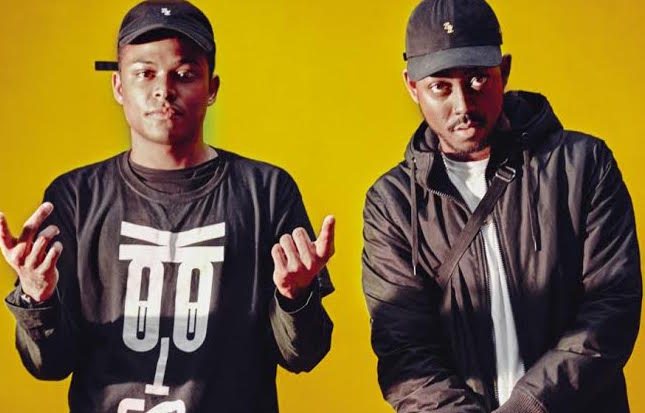 Las Vegas- known across the globe as the city that’s fueled by booze and casinos. However, for one weekend a year, around 400,000 electronic music lovers head over to the Las Vegas Motor Speedway and dance the night away to the sets of their favorite DJs under the electric sky. However, for those that believe three days just isn’t enough, EDC hosts an EDC week that starts on Wednesday, prepping EDC attendees for the weekend ahead. Filled with not only evening club events, but also day time pool parties, Vegas greets ravers with its arms wide open, and Fat Tuesdays in each hand. 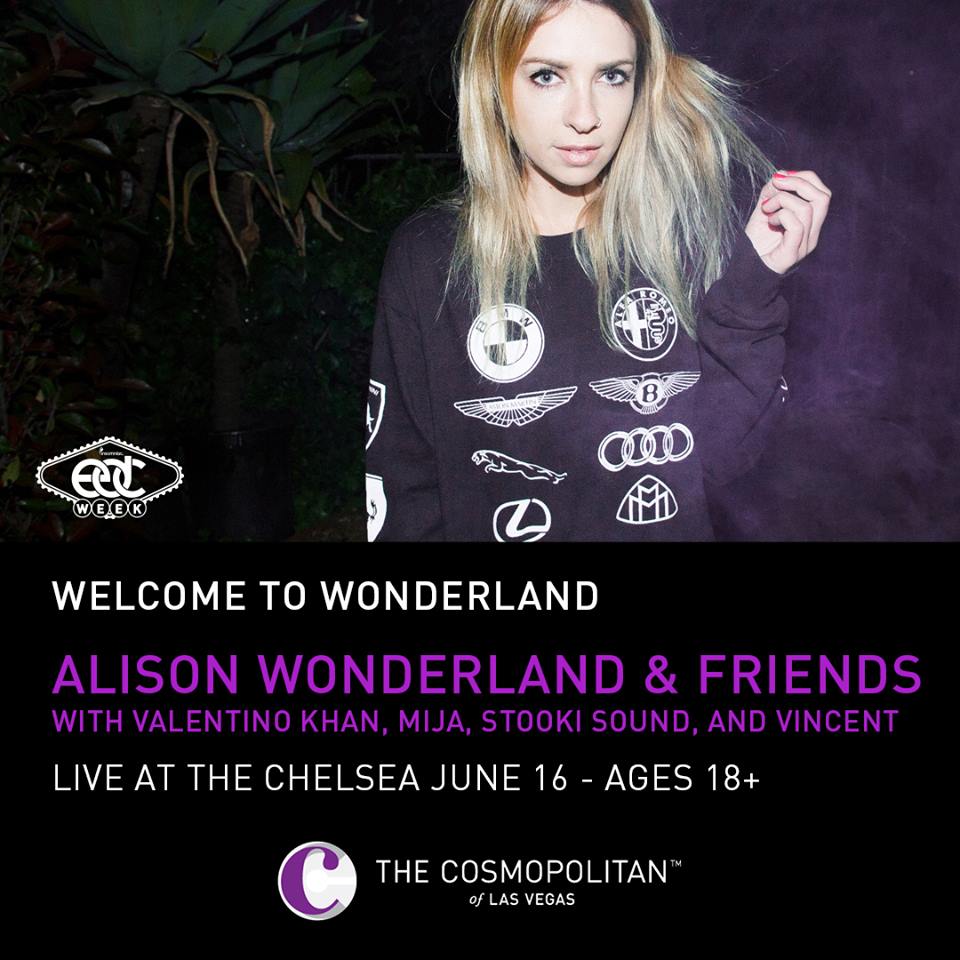 The best place to be on Thursday evening of EDC week in my opinion was none other than the Alison Wonderland & Friends show that took place at The Chelsea in the oh so posh Cosmopolitan hotel. Knowing that Alison Wonderland would be one of the first solo women artist to grace the main stage at EDC this year, I was eager to also see her in a more intimate, while still incredibly high energy setting, along with tons of other amazing artists on the evening’s roster. Clearly, I wasn’t the only one with the same mindset. As I walked into the venue, the room was jam-packed with attendees, ready to kick off their EDC Week in best way possible with this stacked lineup.

Stand out performances from the night for me definitely included both Stööki Sound and of course, Alison Wonderland. Stööki Sound includes two boys from the UK that have a huge passion for not only music, but also educating people about different types of sounds. It’s always a pleasure seeing them as live as their passion truly transcends into their live performances. Although the set at this particular show only included half of the group due to Luke being holiday for his birthday, Jamal still absolutely smashed it. A short yet still incredibly sweet set, classic tracks such as “Uppers” made the crowd go absolutely wild. The entire crowd was going hard, drop after drop. So hard that the floor was literally bouncing up and down to the point where I could be standing still yet still physically moving which just goes to show how rowdy the crowd was!

Lastly was of course, Alison Wonderland. The stage was switched out from a normal DJ table to her iconic AW booth. Small yet mighty, Alison was incredibly fierce on the stage. She effortlessly blends tracks, all while simultaneously keeping the energy high throughout her set. My favorite part about her performances is that she’ll take the time to leave the DJ booth and dance along with the rest of the crowd showing that she’s having just as much fun as we are.

After the show, I had the chance to catch up with Jamal of Stööki Sound. Since our last interview with Stööki, a lot has happened for this group, and we got to chat about what life on the road has been, and of course, what it was like to be playing their very first EDC Las Vegas. 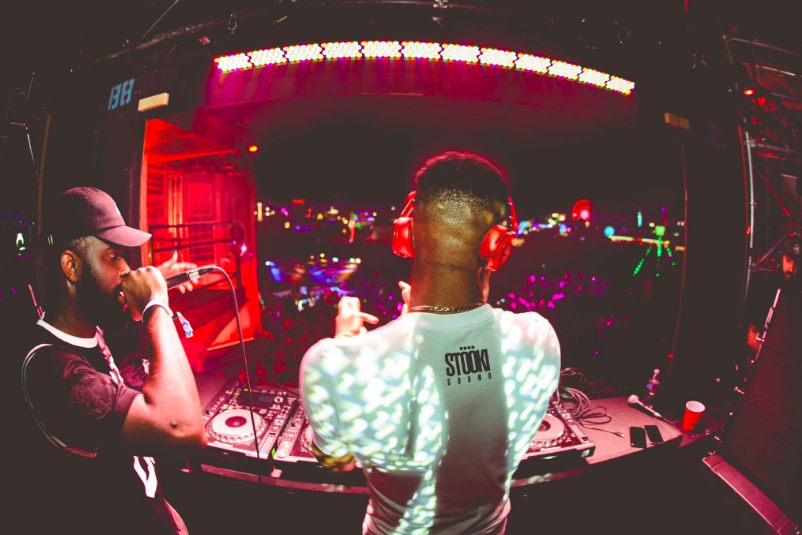 TSS: Tonight you’re playing with Alison Wonderland & Friends at The Chelsea. How does it feel to be in Las Vegas and kicking off EDC week?

Jamal: Sick! We’ve played in Vegas twice before, both of which were cool too. Vegas is always a sick time, especially since people obviously always come out here to party. It’s a bit different from what we normally do, so we normally come out here and keep in mind that people are very accustomed to hearing that hype shit all the time. So we try to educate the people with our sets, while trying to still play something we know that they’ll like.

The Alison Wonderland show overall is also a super stacked lineup. Mija, Alison, Valentino…people pay big bucks to see a lineup like this! Everyone has their own style, does their own thing, but we all definitely play within the same realm of music so it was fun. We don’t have to worry about all of us playing the same tracks. My set personally was a little shorter than expected, but people were coming up to me saying, “Yo that shit was sick for only half an hour!” Which is always great to hear.

TSS: You’re about to play your very first EDC Las Vegas. Can you dive a bit into this experience and how it feels to be playing this massive festival, especially after coming from the underground scene in the UK.

J: It’s still quite overwhelming! Even though we’re playing one of the smaller stages, just the fact that we’ve come from the streets of London to playing EDC Las Vegas is crazy. Sometimes I sit there and it doesn’t really hit me…I’m very focused and all about the “go, go, go” with things. It’s good to know that people are watching and that people respect what we’re doing because we’re doing something that’s a bit different. A lot of the stuff we’re doing right now, a lot of people haven’t even heard of yet. It’s sick to hear that people are still excited and woke about our sound. It’s a blessing, especially since you always see artists coming and going in this industry.

We used to produce for hobbies and were more about Djing. Luke and I only DJ’d in London, all trap and hip hop. But when we decided to delve in to production, it worked out wonderfully. We took the time to sit there and perfect our craft and get better with our sound, which takes time y’know! It’s not something that happens overnight, but we’re in a good place, and it’s awesome that we’re on the EDC roster. Playing EDC is definitely monumental for our career, so we’re going to be using this show as fuel to continue growing.

Luke is on vacation right now because it’s his birthday week, having booked his holiday before we were booked for EDC, so I’ll be playing this show by myself. Although Luke and I came together for Stööki Sound, prior to this project, we were our own projects being Jelacee and DJ Lukey. It’s going to be different, especially since people are more used to seeing me on the mic and hyping up the crowd. Without Luke, I’ll be on the decks focusing and won’t be able to be hyping up the crowd as much. But I still will be reading the crowd and playing based on the energy they give me whenever I am on the decks. Tonight at the Alison Wonderland show was the first time I played by myself in a long time, and it’s a different experience, but it really reminded me that I really enjoy being behind the deck too even though being on the mic is more my forte. But without Luke, we’re still going to be bringing everything that is Stööki Sound to EDC. He’ll be there in spirit [laughs]. 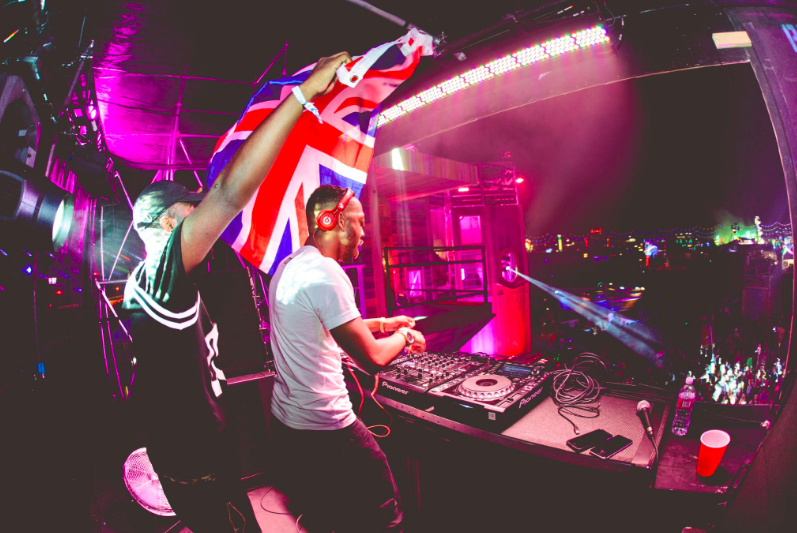 TSS: You’ve been touring a lot recently! How has it been bringing the Stööki movement all around the world, and what plans do you have to continue the spread movement?

J: We call it the movement because we’re trying to do something different. Right now, it’s more focused on our music, we have EPs and tracks on the way, trying to figure out how to make it grow. Otherwise, we’re wanting to figure out merch, including t-shirts to just throw out into the crowd. Instilling that mentality and planting that seed into our fanbase is what we’re currently working on. People need to understand what our movement is all about and have an exact reason as to why people are part of the movement. It’s still in the works, and mostly revolves around our music right now, but we’re going towards a more solidified movement as a whole.

What I love most about our followers is that they’re really loyal. I remember once we were on tour with Keys N Krates, where we weren’t even the headliners, and some guy came up to us telling us that he drove 9 hours to see us which I thought was absolutely crazy. It’s really sick to see all over the world that we’ve got loyal, hardcore support. As they support us, we support them such as trying to come up with new ideas and things that’s fresh for them. Unfortunately, a lot of things require money. We do everything in house, we don’t have a guy behind giving us a shit load of money. All the money we make is what we use to live our daily lives as well as to put back into Stööki to further create more for the project.

TSS: That’s cool though because it proves that everything Stööki stems from passion and passion only.

J: Yeah exactly! That’s why we work for hard. We don’t have that person we can just fall back on. It’s very new for us still, we’re still learning and trying to figure things out. We’re still trying to get our foot in over here in the United States, while still having one foot in over in the UK and keeping our roots true to ourselves. It’s hard work, but it’s fun. Like you said, it’s the passion that keeps us going. We want to keep doing what we’re doing and keep staying real.