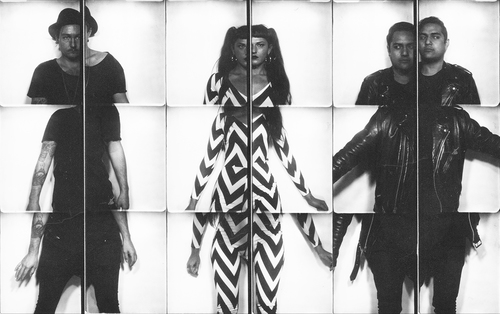 In a time where we see so many producers in the world of electronic music create music that can hardly be separated from the rest of the pack, Brooklyn’s risque techno/multimedia group Tiger Tooth has made their presence felt by doing things their own way. Johnny Siera, William Broussard, Sofia Szamosi have shaken up the world of techno with their unique ability to infuse their music into a visual experience, unlike anything you’ve ever seen before. We had the opportunity to chat with Sofia about the video behind their latest single and to get to know the trio a little bit better.

“‘Tiger tiger tooth tooth’ video features the dance moves of the band, accompanied by Ricky, a regular customer from johnny’s old Brooklyn bar, The Flat. After months of appreciating Ricky’s moves, I asked him if he would be part of our video and he agreed. He was a pretty soft spoken guy, but surprised us all on the day of the shoot by taking on a directorial role, choreographing our moves and really keeping the energy up. The video also features old footage from earlier creative escapades shot in our kitchen, and is the conclusion of a 3+ year interest in zentai suits. – Sofia:

TSS: Tiger Tooth essentially started during a slam poetry-interpretive dance session in an East Village apartment, can you tell us a little bit more about that night or shall I say early morning and when you decided to that the project to the next level?

Johnny & Will: We were really just hanging out and getting beyond weird, and a track came out of it. Sofia was walking around in a night gown with a microphone attached to a broomstick reciting William Blake’s “The Tyger” and we were both staring at the tips of our noses trying to figure out how to record it. We met up a week later to finish the track and were stoked but it was weird as fuck lol. It wasn’t until a year later when we starting booking graveyard shifts at our homies studio “The Submarine” that we really focussed our ideas and developed the project. We were both playing less live band shows and working more in NYC nightlife and both felt a strong desire to have a creative outlet again.

TSS: You each have roots in NYC nightlife, how much does that inspire you three and help your creative process?

Johnny & Will: NYC definitely has dope underground house and techno parties and the ability to see amazing talent on a regular basis. NYC nightlife isn’t per se the inspiration, but living in NYC definitely factors in to being inspired. When we were writing the record we were in the studio almost every Friday andSaturday night so I think in reality our creative process is more inspired by getting together as a crew and making art.

TSS: What’s a studio session like for you three?

Johnny & Will: Well there’s music sessions where we write the music which is essentially getting together with modular synthesizers and class A outboard gear and pretending we know how to use it. The video sessions on the other hand are a somewhat psychedelic experience where Sofia is usually dousing us in paint, homemade costumes,, various oils, zentai suits, dog suits, food and we’ll, you’ll get to see them…

TSS: Tiger Tooth’s visual aesthetic and commitment to “dark, slimy” techno go hand in hand, tell us a little bit about the making of the “Tiger Tiger Tooth Tooth” video.

Johnny & Will: Well if we were comparing it to the Bible, there are two parts almost like Testaments if you will. The first a no sleep, fire and brimstone adventure of the worst B grade filming you could imagine in overly tight zentai suits. The next shoot was over a year later in a much calmer and forgiving frame of mind. We asked our friend Ricky who was a regular at the bar we worked at whom we had admired both his dance moves and stories of shirtless stand up comedy to star in the video and he was so enthusiastic, directing us about. It was kind of amazing.

TSS: Sofia, with your input and spearheading of all visual elements, Tiger Tooth is evolving into much more than just a musical project. What is your ultimate goal as the visual artist?

Sofia: My goal is always to weave art and play into everything I do and have all parts of my life be one big creative project. Tiger tooth has been a way for us to connect our work together.

TSS: Techno tends to have a love-hate relationship with many electronic music fans. How/where do you draw inspiration for videos when the actual music might be very minimal?

Sofia: Our videos have all emerged in different ways – some popping into my head while working out (techno is good for that), and others evolving through multiple trials and tribulations. The music has to be the spine of the video, but the inspiration can come from anywhere.

TSS: DJs and producers are incorporating bigger budgets and many more visual aspects into their live performances. How do you envision your role with the group evolving in that sense?

Sofia: No interest in big budgets. I’m more interested in creating performances that are danceable, life-affirming and ideally in the sunshine.

TSS: With Johnny and Will having previously experienced great success and synergy as members of the Death Set, how was the process like for you to acclimate yourself to their nuances and working process?

Sofia: Luckily Johnny is my husband and Will one of our best friends, so there has been no shortage of synergy. As a lifelong secret musician locked inside a non-musical body, I have appreciated living vicariously through their musicianship, and slowly discovering my own voice. I am the front woman of our next musical project, Mouse Snout, a punk band for kids and adults.

TSS: Your “Tiger Tiger Tooth Tooth” EP dropped March 18th, your self-titled album coming out next month, what else can we expect from Tiger Tooth in the near future.

Johnny & Will: The upcoming album is 15 tracks and we have six video’s made with more to come. The whole concept of the project is a multimedia full length album. We wanted to present this large body of work from the get go. These days we see full length albums becoming obsolete, and especially in dance music. We feel the album explores various styles and makes sense presented all at once as one cohesive body of work. A mission statement and a solid presentation of years of work rather than a quick flash in the pan of disposable media.