We Missed You, Hulaween 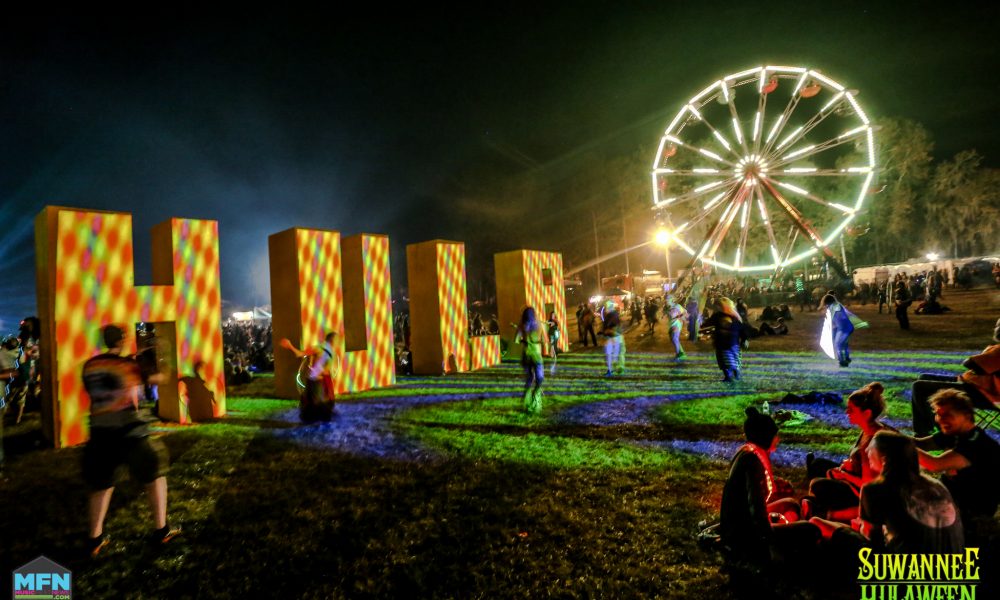 As the Music Festival realm continues to become more saturated on a weekend basis, providing an environment that encapsulates every aspect properly continues to be a demanding challenge. There appears to be a constant cycle of identical headliners and supporting artists throughout the larger scale Music Festivals every summer, so diversifying yourself by creating an individualistic bill speaks highly of your reach to the masses. This effort may be farfetched, but Suwannee Hulaween has absolutely perfected this technique.

When Suwannee comes to mind, jam bands and funk bands alike begin to run rampant throughout your head. Your brain feels like a jellyfish as it begins to calmly and strategically pick which acts you will be seeing over the weekend. One act that might have taken the entire Suwannee demographic by surprise was Chance The Rapper & The Social Experiment.

While hip-hop is to be appreciated and thoroughly enjoyed by all, how it would pair up alongside a lineup filled with jam bands was a true test of musical reach. Needless to say, Chance and his gang of misfits took full control of this opportunity.

Chance The Rapper brilliantly started off his set by introducing old fans and new to four of his most recognized tracks off of Acid Rap. “Everybody’s Something” made everybody immediately aware of the type of performance that we were about to witness. (Reread that title if you’re ever feeling down.) As many other hip-hop acts get criticized for monologuing throughout their performances, Chance briefly talked in between each song to: describe the tracks, introduce each member of The Social Experiment, and let us know that he is from Chicago.

Scattered throughout the set list were multiple songs in which he had collaborated with other artists over the years, Action Bronson’s “Baby Blue” being the most recognizable. When “Favorite Song” came on shortly before the encore, Chance had the attention of every hacker sacker in the audience. As if the overall performance itself wasn’t dazzling enough, the way the trees were illuminated by his lighting designer behind the Main Stage was spectacular.

When you’re at the helm of your own Music Festival, you grant yourself permission to play as many sets as you damn well please. Lucky for us, The String Cheese Incident kindly accepted their own offer by treating us to SEVEN extraordinary sets over one magnificent weekend. With a smorgasbord of original songs and properly practiced covers, there was never a dull moment for any member in the crowd.

While we would never tell you to intentionally ditch one of their concerts for another act (seriously, don’t), there was an exact hour throughout Halloween night where permission would have been granted for such a choice: Goldfish at the Spirit Lake Stage. If you haven’t heard about these guys yet, make sure to do yourself an immediate favor and listen to any of their songs.

Every Goldfish performance that we’ve ever attended, large or small, has been an insane dance party surrounded by happiness and well-being. Their Hulaween performance continued to fit their part. Their Livetronica, Nu Jazz style perfectly incorporates other styles of music from around the world that aren’t as commonly heard here in the states.

They Played Everything You Wanted To Hear
Odesza

Throughout the entire year of 2015, hearing Odesza’s name on an upcoming lineup somewhere close to your city was inevitable. Rightfully so, too. Each one of their performances is more dazzling than the last. Their sets at SXSW were almost impossible to attend because of the uncontrollable demand, so we knew there was something about these two. Their set at BUKU was enthralling, but the surrounding beauty from SOSMP truly made their Hulaween set special.

A set list comprised of countless originals and flawless remixes solidified the audience’s reasoning for packing out the Amphitheater Stage. From widely recognized “Sun Models” to their immaculate take at ZHU’s “Faded” (personal favorite set moment), this duo has rightfully earned every ounce of appreciation. Their visuals and lights were enough to draw any patron from any distance, but getting close enough to hear their perfected technique was captivating and too firm a grip to release yourself from. As per usual, TPA himself was decked out in an absolutely flawless jumpsuit that causes everyone to gravitate his way. His dazzling impedimenta coincides perfectly with the energetic ambiance that is recognized worldwide during his performances. (TPA, if you’re reading this, I need an XL jumpsuit.) Each one of his sets is truly rare and special, bringing together the musical styles of previous generations and current with a futuristic mindset. The Funkiest Diplomat is one of the most knowledgeable men when it comes to Music and Mother Nature, so knowing that all of his live sets are coming directly from his solar powered, off-grid community homestead allow you to truly appreciate this man’s vision and talent. Finding a better way of spending an entire hour at that given moment was an impossibility.

The most difficult part of any Music Festival for every patron is having to come to terms with the fact that closing time begins to quickly approach as the final acts take their respective stages. What made Suwannee Hulaween even more difficult, aside from the fact that we would have to be parting ways with one of the most gorgeous sites in the world, was having to choose between STS9 and TAUK to carry us into the remainder of the night.

Alas, our decision was made: STS9 had won the coin toss and they would be taking the Main Stage for our viewing pleasure. What ultimately helped us make our choice was the stunning backdrop of Spanish Moss that was incorporated into each set over the weekend. While our four-hour return to Atlanta was imminent, there was nothing that could haul us away from their set during that given moment. As soon as “Totem” (a personal favorite) started, I knew we had made the brightest decision of our entire weekend.

The audience had no focus on what was to come at the end of this set. They had given their undivided attention to STS9, ourselves included. Happiness and sheer bliss was being expressed and received by all. Love makes the “World Go Round”, but music keeps it spinning. As the penultimate track of the night played, our trip realized its finish line. Our departure was quick and disheartening, but our anticipation for the following installment of Hulaween has kept us patiently content. Till 2016…

Our idea in putting together 2015’s review and 2016’s initial lineup announcement in this article was to clearly display the incomparable brilliance possessed by the individuals responsible for Hulaween. Year after year, they successfully provide us with a nearly (there’s always that one guy…) flawless lineup consisting of various artists whose personas blend tremendously with the vibes of Suwannee. 2016’s lineup couldn’t pair more perfectly with that concept.

Reigning supreme once again atop the Bill (pun intended) shall be Mr. Nershi himself and the rest of The String Cheese Incident. Joining them in 2016’s shenanigans are: My Morning Jacket, Disclosure (DJ Set), Snarky Puppy, Lettuce, Bob Moses, Anderson .Paak & The Free Nationals, STS9, and I’m going to stop myself there before I physically freeze myself in anticipation of Halloween weekend. From a personal standpoint, this lineup is immaculate from start to finish. The fact that many more acts are still to be announced is truly a delight, so keep them coming! 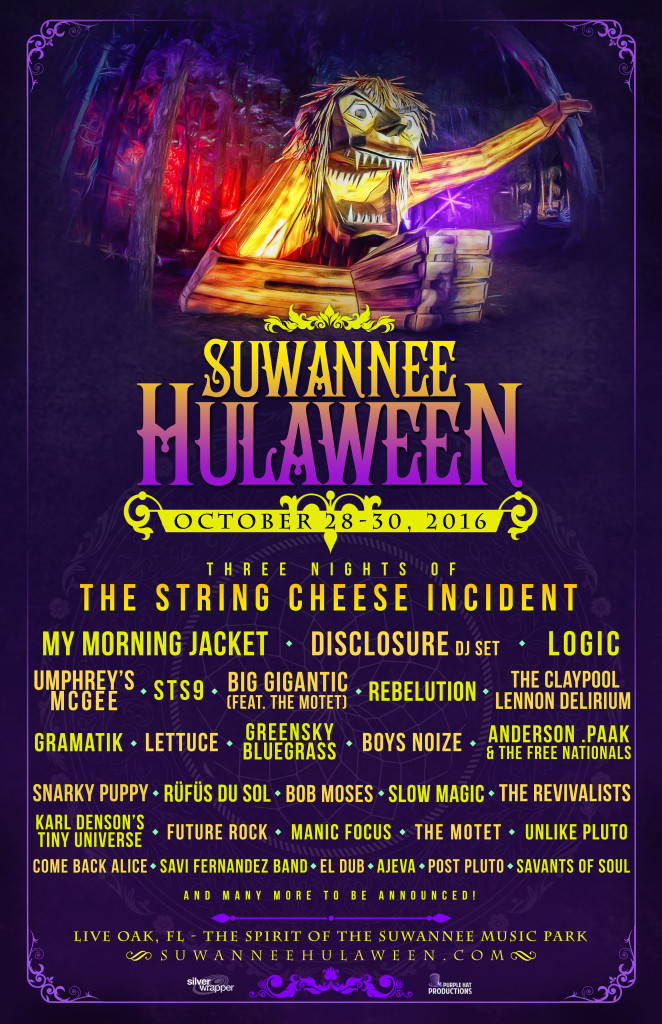 Stay updated with everything that will be happening in the coming weeks leading up to Hulaween! Purchase your tickets here: http://suwanneehulaween.com/