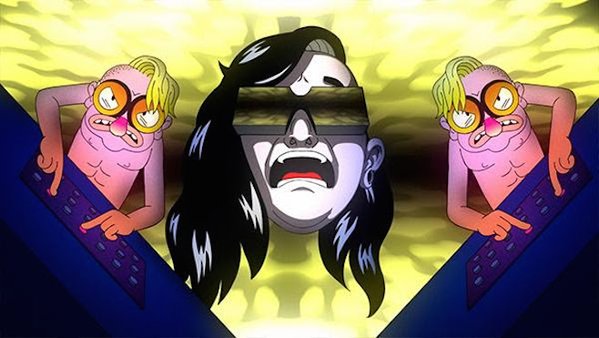 Earlier today Red Bull premiered the psychedelic visuals for the bass packed collab track between Skrillex & Jauz and Fatman Scoop titled “Squad Out!” While the tune was featured in Cartoon Network’s “Adult Swim’s Singles of 2015” it was until today that the song received the full animated treatment courtesy of mastermind Adam Fuchs. Now, if you’re like me and love to watch trippy shit come to fruition then this is for you. “Squad Out!” features Skrillex and Jauz undergoing a crazy exploration that begins with an elevator ride whose levels bring them face to face with an evil master mind, some crazy spirits, and a bad ass Fatman Scoop. So squad out and take the ride! Who knows where you’ll end up.

Also check out what animation director and artist Adam Fuchs had to say about the video:

“There was this really great moment that happened before starting the video,” he says. “I woke up from a deep sleep on my couch to a late night talk show on my TV. They were airing a bit that had a fake Skrillex battle rapping with Ben Franklin and I was so exhausted, I didn’t quite know what I was watching. It was one of the weirdest and most confusing things I’ve seen in a long time. I knew at that moment, I had to make something that could be viewed in the same way I saw that skit. I hope I accomplished that.”- Adam Fuchs