It’s almost the end of December and the New Year creeps up on you faster than you anticipated. When it comes to choosing the perfect event to end the year in one last hurrah, it becomes a daunting task as many events offer you “exclusive VIP benefits” or a “champagne toast” to entice someone to attend. One San Diego based company, however, keeps it simple year after year by keeping their NYE event centered around the music, enlisting the help of some of the hottest names in dance music to ring in the new year proper. We’re of course are talking about LED Presents and their massive OMFG! NYE event, one of the only 3-day festival-like experiences around the end of December that has never missed a beat since 2012, packing the Valley View Casino Center to the brim with excited attendees December 29th through the 31st. 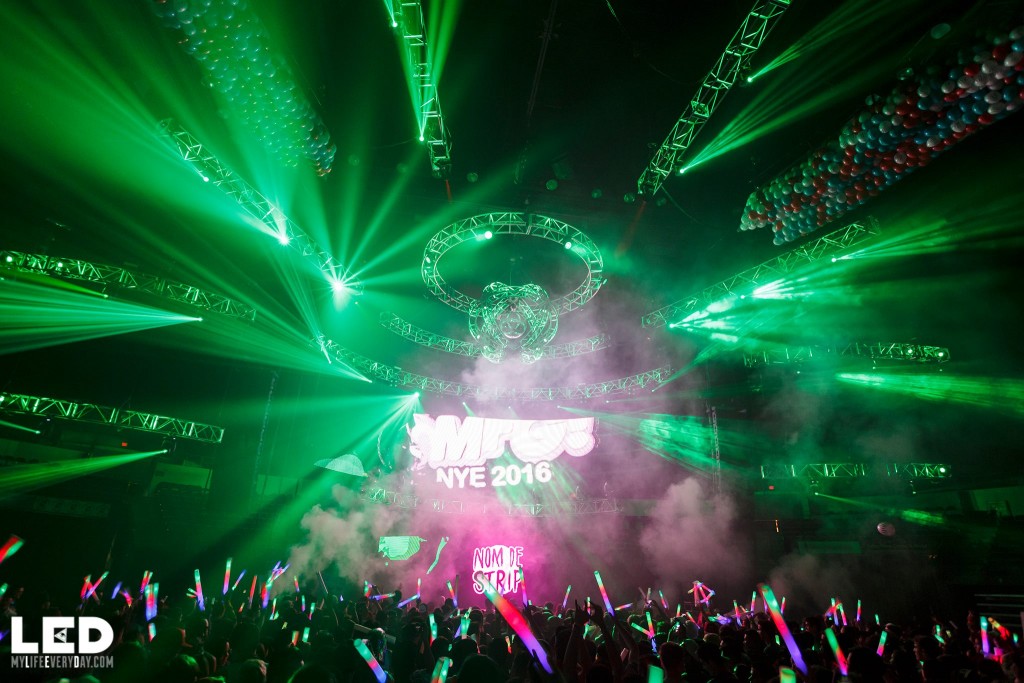 Before we talk about the various acts of the event, a few words have to be said about the level of production LED Presents dedicates towards the event. For an event that can hold 16,000 people, there can be obvious concerns if one can enjoy the same music and visual quality of the stage from afar as would an attendee standing right in front of the barricades. Luckily, LED Presents is not one to skip on their production quality as they packed beautiful, wide and colorful LED panels all over the stage that beamed out the lasers and flashed the vibrant visuals throughout the three days. TL;DR, the visuals were insanely epic. It’s this festival-level quality of sights and sounds delivered in such a small venue (compared to other popular festival venues like the Las Vegas Motor Speedway or San Manuel Amphitheater for example) that gives OMFG! NYE a unique individuality as though it aims to stimulate everyone’s senses, keeping people immersed in not just the music, but the experience the event has to offer. For example, the inflatable zebras and balloons are always a treat for the crowd to play with, while totem poles, gloves and flags are encouraged for goers to express themselves. It’s these small aspects that make OMFG! NYE a unique and a fun event to participate in rather than just attending it solely for the stacked lineups. 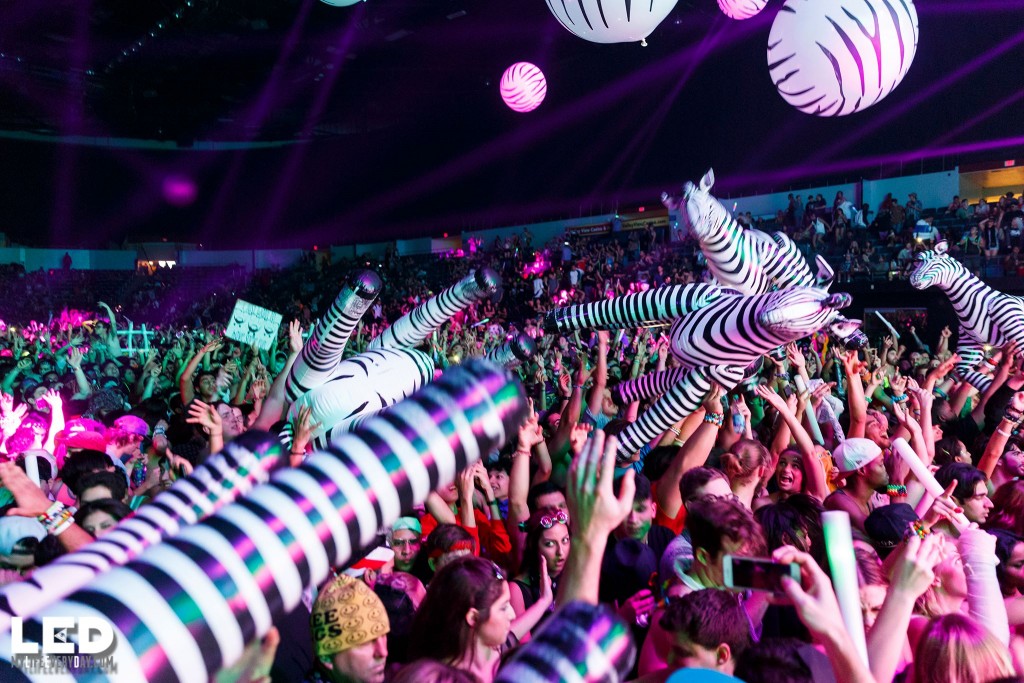 Speaking of the lineup:

Day one began with a heavy dose of bass with performance from the likes of Borgore, Tchami, Snails and  Party Favor. While Party Favor got the crowd riled up earlier in the night with some classic throwback songs from Dr Dre and Backstreet Boys, Tchami quickly followed up with his signature future house. His remix of Jack U’s “Take You There” and his single Freakin’ Girl were quick to get everyone shaking their booty all over the dance floor and then quickly changed the pace by dropping a set favorite DnB track “Nobody To Love” by Sigma. Borgore, the real king of Booty, then took the stage, and quickly demonstrated why he earned himself a headliner name for Day 1. Notable favorites with the track was his track Tomahawk and Decisions, which he proceeded to sing live in unison with the crowd. Lastly, Snails blew the crowd away with even more grime as he blasted Pussy Riot by Flosstradamus and his Holla Out VIP with Jack U U, bringing the intensity of the night to all time beak as he delivered smooth transitions and dirty grime.

The most variety in genres was on the second day when acts such as Kayzo, Porter Robinson, and Kill The Noise took the stage. Kayzo was one of the first artist to open up the second day by quickly warming up the crowd with some of his own unreleased IDs and playing the Red Lips remix of Skrillex to set the mood for the night. Following up after Mija in the night was the main headliner Porter Robinson, whose DJ sets have been making a buzz as of late. True to the rumors, he opened strong with an energetic Worlds edit of Rustie’s “Big Catz” and then quickly transitioning to a variety of genres ranging from trap, drum n’ bass, and even a Daft Punk remix of “One More Time” that had the crowd stomping all over the dance floor. Kill The Noise’s set quickly continued the theme of mixing up genres by playing material off his LP “OCcult Classic” playing tunes such as “FUK UR MGMT” and “Spitfire”. Just as he everyone throwing their arms up in their air and got thier booty shaking, he quickly mixed things up with a hardstyle remix of the Legend of Zelda theme, quickly causing mayhem all across the venue. 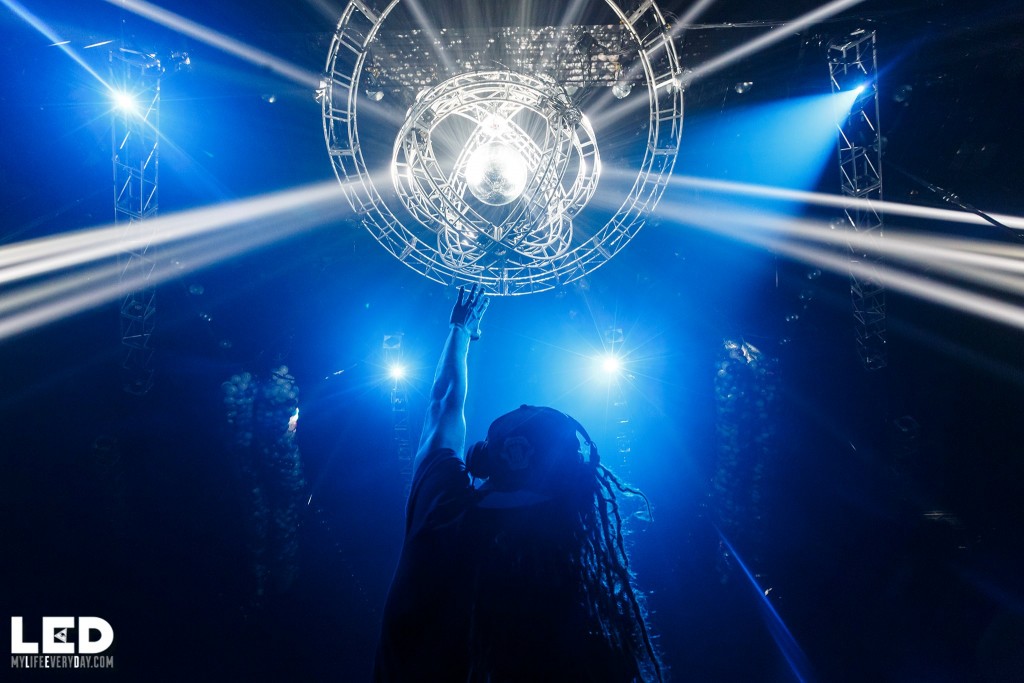 The third and final day of OMFG, and New Year’s Eve night was packed with trap start to finish. While Hot Fire brought some Night Bass/house vibes to the early attendees and Hunter Siegel brought some more house with a side of his trademark Dark Plur ;(, the rest of the evening was packed to the brim with bass and 808’s. Stooki Sound, a duo who have made a name for themselves during 2015, dropped their new single Stage Dive and even brought our rapper Marky D for a live performance of the song.

Up next was NGHTMRE, who IMHO, had the best set of the evening. Dropping epic tracks of his own like STREET, Live This Nightmare Remix, Lighter’s Up and more, the crowd was going absolutely wild during NGHTMRE’s energetic set. The mysterious and marvelous Marshmello followed him, and we shared the 2016 countdown with him in an amazing moment full of love and happiness, as the crowd counted down to the new year in unison as hundreds of balloons dropped from the ceiling. Post 12AM – the night was a whirlwind of amazing sets from Valentino Khan, whose track Deep Down Low, is 2015’s most played track in live sets. Up next were Jauz and Flosstradamus, and it goes without saying that both acts brought the heat right up until the show was over at 4AM.

All in all, OMFG! went off without a hitch. From the kind and helpful security, amazing indoor arena venue, beautiful visuals, well behaved crowd, to the incredibly stacked lineup of artists, 2016’s OMFG! was the perfect way to begin the new year. 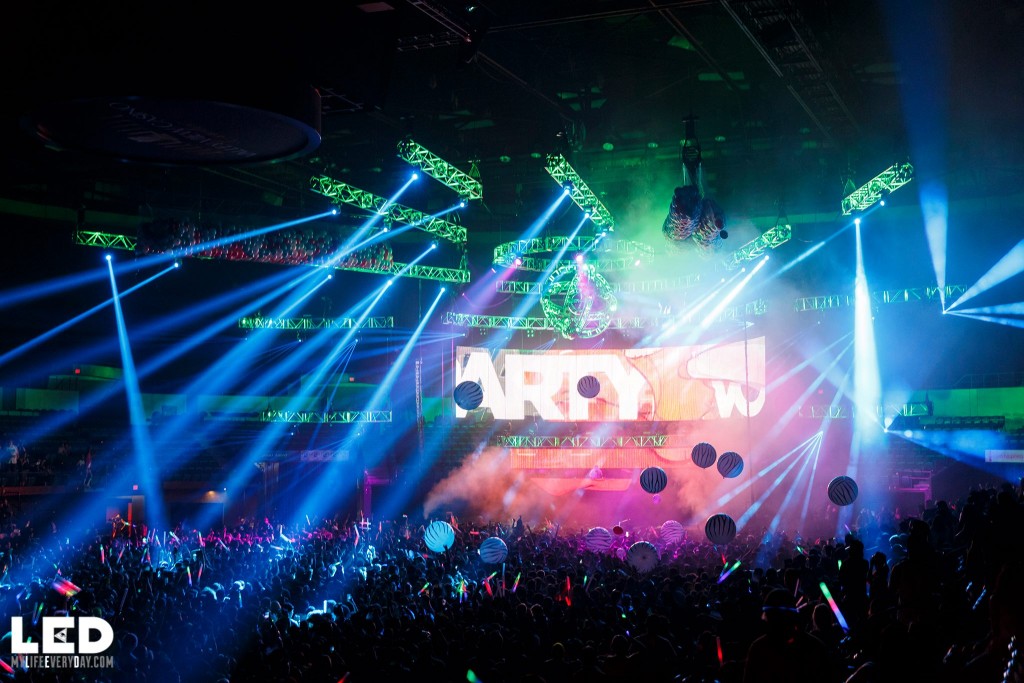