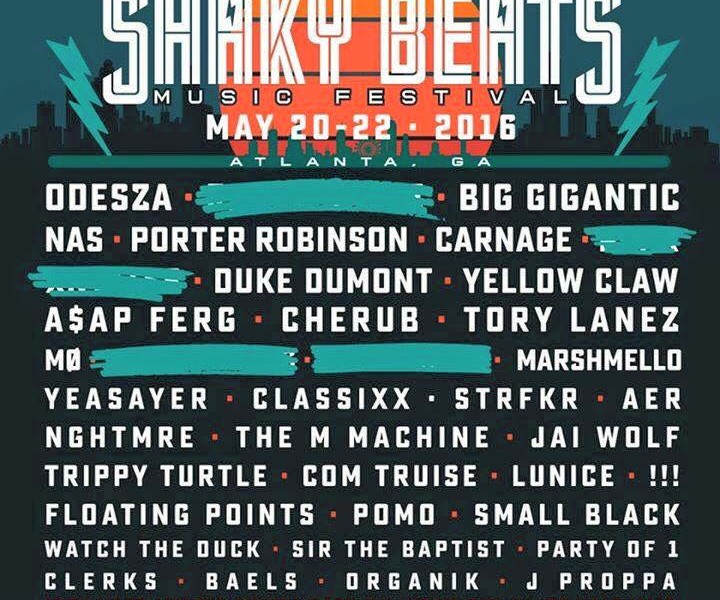 As new Music Festivals continue sprouting throughout the world, picking the proper city in which to hold it has become as much of a challenge as curating the “perfect” lineup. As if that in itself isn’t enough of a difficult process, selecting which weekend to host your event gives you an exciting attempt at beating out your competition. If you happen to be free during May 20th-22nd in Atlanta, Georgia, Shaky Beats Music Festival cordially invites you to their corybantic soirée!

Shaky (insert word here) Music Festival has become a staple throughout Atlanta’s music scene. Shaky Knees, their original protege, provides fans of indie and rock music with a nearly flawless lineup on an annual basis. Shaky Boots, their country arrangement, provided fans with an exceptional lineup in 2014. In 2016, electronic fans and hip-hop/rap fans can happily rejoice in knowing that these masterminds have finally tended to our needs!

Odesza immediately became crowd favorites the moment that they hit the scene, so it’s an absolute treat that they will be headlining the inaugural Shaky Beats! Joining them at the top of the list is the legendary Nas and the dynamic duo that make up Big Gigantic. If that doesn’t tickle your fancy, the other performers are: Duke Dumont, Porter Robinson, Marshmello, Cherub, A$AP Ferg, Yellow Claw, MØ, Trippy Turtle, !!!, Jai Wolf, and many more!

Our team has had an attendee at every Shaky related event over the last three years, so we’d be damned to miss out on their latest creation! We’ll see all of you cool cats in Atlanta for another epic weekend!