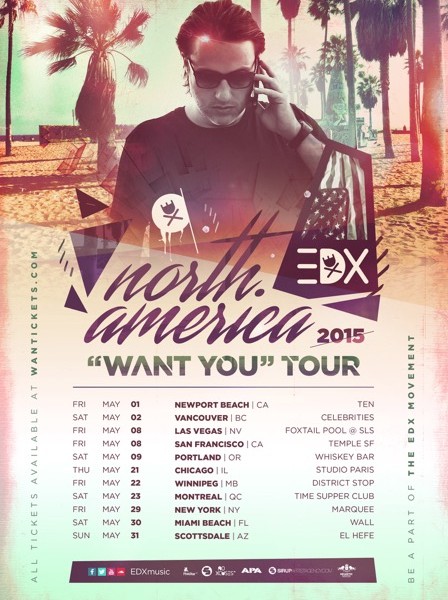 Adding to his recent new release, “Want You,” on Ministry of Sound’s HK Records, EDX has just announced a tour around the U.S. by the same name. The tour, which is kicking off this weekend, will see EDX make his way from coast to coast for 11 shows over the next 31 days. His upcoming tour comes as a surprise, considering he just finished his massive Progression of Sound U.S. Tour, but the dance music veteran is always itching to get back on the road and do what he loves. Alongside the tour announcement, EDX just previewed a summery remix of Sam Feldt’s “Show Me Love” via Spinnin’ Deep.

Starting in Newport Beach and ending in New York, EDX’s “Want You” tour will cover major cities across the country like Portland, San Francisco, and Miami. Get tickets to catch EDX on his “Want You” tour here.