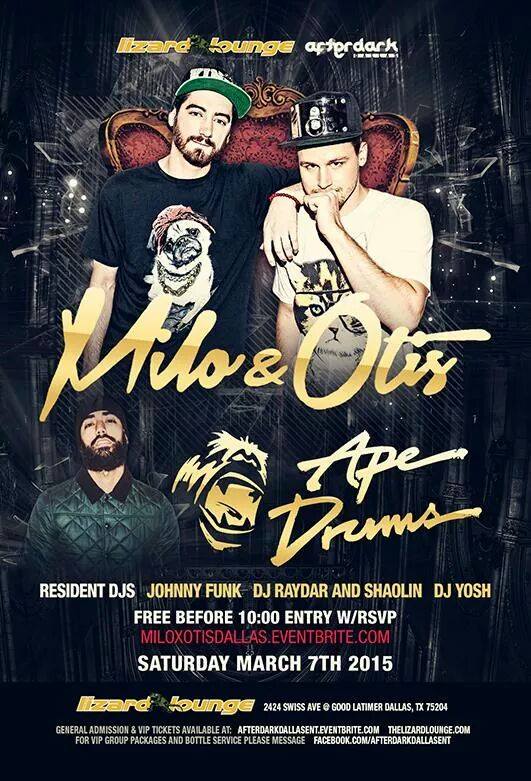 I’ll admit I’m not the biggest fan of trap, but considering the fact that Milo & Otis have made some fantastic tracks, I just had to see them live. Last night I had the opportunity to see Milo & Otis, along with Ape Drums on opening duty, at my favorite club in Dallas, the Lizard Lounge. I arrived on time to catch Ape Drums play. Although he’s played in Dallas a couple of times, I’ve never seen him nor knew any of his music. He started off his set with Major Lazer and DJ Snake’s collab, Lean On, followed by a new original that I would describe as “moombahton af”. He proceeded to drop Backstreet Boys – Everybody (Oski x Lennon Bootleg), which got the whole club going nuts. An hour later into his set he played a track that reminds me of the festival sounds of a Mad Decent Block Party, which he claimed he made a day ago. Then he went onto a trap bootleg of Sidney Samson’s Riverside, some Jack Ü (To Ü, Holla Out) and Daft Punk’s Around the World. Before I knew it, it was time for Milo & Otis to start. They played a slew of tracks I didn’t know, including a bootleg of the ’90s hit, Whoomp! (There It Is). They showed some love to Ape Drums by dropping one of his tracks that he didn’t play. Then it was an onslaught of goodies, including their NRG remix, Tell Me (which turned 1 year old today), RL Grime’s bass heavy Core, Take Ü There, and Knife Party’s Boss Mode. Towards the end of the night, Ape Drums came out and played b2b with them. Both acts provided the heat and needless to say it was a very good night.