Get Excited for the 6th Annual OVO Fest! 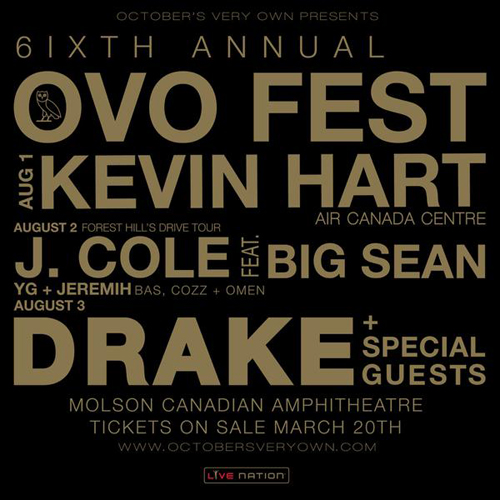 Get Excited for the 6th Annual OVO Fest!

Drake just announced the lineup for the 6th annual OVO Fest in his hometown of Toronto and the lineup is stacked! Kevin Hart kicks off the three night affair during the first weekend of August at the Air Canada Centre. Things heat up for the second night as J. Cole brings his Forest Hills Drive Tour through. Already featuring many big names including Big Sean, Jeremih and Y.G., we expect even more special guests to show up and support the Cole World. The finale on August 3rd at the Molson Canadian Amphitheater is sure to be electric and will feature Drake with still to be named special guests. Last year, Outkast performed with Drake and tore the house down. We are excited to see what the October’s Very Own frontman has up his sleeve this year.

Kendrick Lamar Presents To Pimp a Butterfly, The Album That Broke The Internet
[Giveaway] Enter To Win A Meet & Greet With Florian Picasso