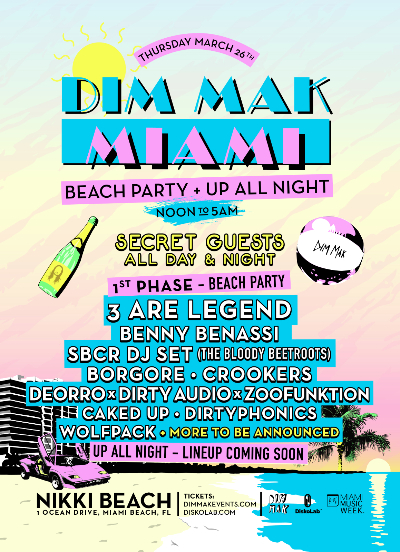 In a city as enthralling and captivating as Miami, it’s next to impossible for any visitor not to immediately be attracted to the city’s vivacity and endless excitement. Filled with a constant display of entertainment, Miami naturally plays host to some of the most anticipated events of every year by music aficionados worldwide. One specific event that has gained global recognition in its five short years of existence is Miami Music Week, an electronic dance music destination that allows for artists/DJs/Performers and fans alike to come fully experience the ever-expanding world of electronic dance music.

Miami Music Week takes an “Inception” style approach by hosting countless parties at various venues and clubs throughout all of Miami. Each party has an affiliation with Miami Music Week as they are within its realm, yet there are a few that stand at the forefront of their competition. Specifically, Dim Mak Miami Beach Party + Up All Night. Dim Mak Records hosted their initial event five years ago alongside the commencement of Miami Music Week. Making sure to provide one of the best lineups year after year, 2015’s installment absolutely follows suit.

Steve Aoki, the mastermind behind Dim Mak Records, will be performing with Dimitri Vegas & Like Mike as their latest collaboration, 3 Are Legend. (Having personally been in attendance at their Tomorrowland and TomorrowWorld performances in 2014, this is a show that you’re not going to want to miss!) Joining these three giants on the Phase One Announcement are: Benny Benassi, SBCR (The Bloody Beetroots DJ Set), Borgore, Crookers, Caked Up, Dirtyphonics, and Wolfpack. One of the highlights of the event will be Deorro performing back-to-back-to-back sets with two of his padawans, ZooFunktion and Dirty Audio. DJ Snake, Laidback Luke, and Carnage have all been a few of the surprise guests to grace the stage over the years at these Dim Mak Miami parties, so there’s no telling what they have in store for us this year!

The Daytime Beach Party will promptly start at 12:00 PM on March 26th at Nikki Beach. Once the sun has gone down, the party will be moved inside as it turns into the Up All Night after-hours affair till 5:00 AM. (Sleep? What is that?) The daytime tracks will consist of heavy-hitting jig starters, while the nighttime will provide us with the smooth and rhythmic melodies that House Music is well known for. We’ll see you all there!

Tickets can be purchased at: dimmakevents.com

Moonrise Festival Will Return August 8th & 9th
Preview: The Governors Ball 2015 Has Something For Everyone