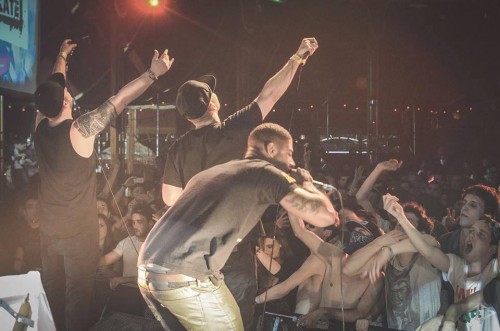 Having just released a deluxe edition of their first LP The Swarm in the US, UK grime tribe Virus Syndicate are making big moves. The Swarm is everything a grime record should be: a collection of bass-heavy tracks with aggressive rap vocals that touch bring the intensity of dubstep to a whole new level. Featuring production work from Buku, DJ Muggs, Skism, and Savant, among others, this is definitely an album worth checking out for any fan of bass music. We also had a short chat with the guys to get the lowdown on their plans for the future, which you can read after the Soundcloud embed.

TSS: How did you guys all first meet each other, and what inspired you to work as a collective rather than individual artists?
VS: We all grew up in South Manchester and were part of an emerging emcee culture that was happening in the ‘00s. Musically we all had a similar approach, work ethic, and ambition, so it just felt right for us to come together as a collective.
TSS: After this LP, what’s next for Virus Syndicate?
VS: We are already working on the follow-up LP, which is coming together nicely; we are hoping to drop that next September. Before that, we’re releasing a collab EP with dutch rap crew Dope DOD that will be out in April. We are also going to be touring like crazy from February onwards.
TSS: With three rappers, what is the process like for writing lyrics and deciding who gets which parts in a given track? And do you generally start with a beat and then write lyrics to fit it, or the opposite?
VS: Its always different. Sometimes we are sent a beat, and if we are all feeling it then generally one of us will take the lead with a concept or a chorus, then the rest will follow. However the new album we are working on has different process, as we are just starting with skeletons of beats and building a lot of the production into the vocals.
TSS: Who are your biggest influences?
VS: We have always been big hip hop fans as well as electronic music fans. Biggest influences I would say have been Wu, The Prodigy, NWA, Nas, Dizzee Rascal, and Wiley.
TSS: Where do you see the music scene going in the next 10 years? Do you think people will still be listening to dubstep and the like?
VS: The music scene and genres are always evolving. Bass music is now a solidified genre of music that I’m sure is here to stay, Popularity of genres always seems to go in cycles. I have no doubt that in ten years people will still be listening to dubstep and DnB and I’m sure that there will be a handful of new sub genres by then too. Music is progressive – people will always strive to break boundaries and create new sounds and trends. As long there isn’t a mass music exodus (laughs), the scene will continue to grow and expand and reach new levels of creativity.
TSS: Like many other American fans of bass music, I’m not too familiar with the grime scene aside from you guys and Foreign Beggars. What other current artists are worth checking out?
VS: You gotta check out Dope DOD, P-Money, Ghetts, Stormzy, and Krept & Konan.

[TSS Interview] We Sit Down With MANIK
Borgore Flips “CoCo” by O.T. Genasis Into a Dubstep Banger