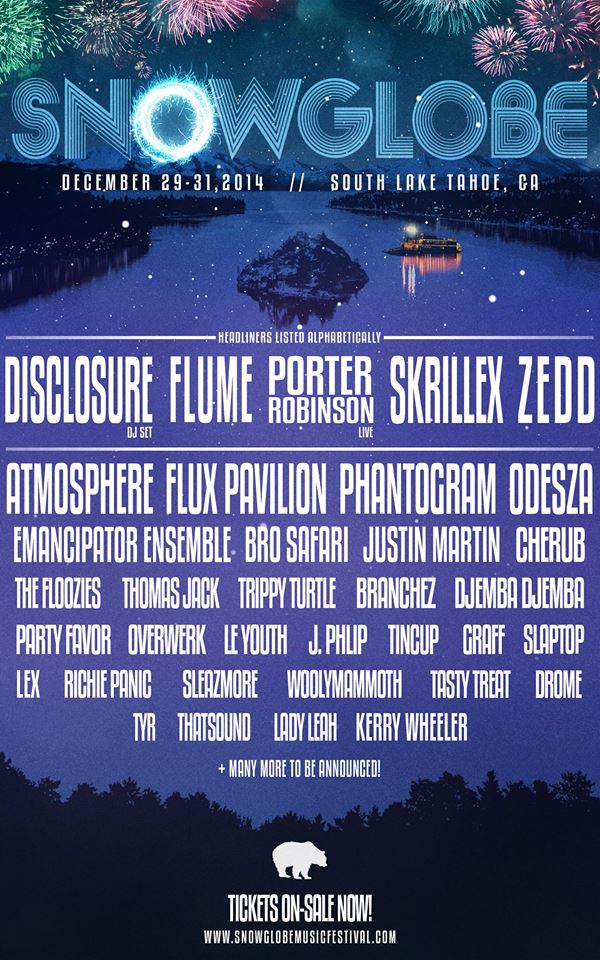 Headliners aside, here are our top 5 acts that you can’t miss at Snowglobe this year.

Greg Jones, the bass technician known better as G Jones is absolutely crushing the scene lately. Whether its his original solo tracks, collaborations with good friend and tour-mate Minnesota or remixes for a slough of artists including the legendary Bassnectar – Greg has revitalized my love for dubstep music over the past few months. If you love groundshaking basslines, be sure you don’t miss G Jones early on Day 1!

Remixes of Diplo, Flosstradamus, RL Grime and many others. Collaborations with Meaux Green, Tropkillaz & Them Lost Boys. Tons of crazy originals including a new one that just came out on Diplo’s ‘Mad Decent’ imprint. To say that Party Favor has been killing it lately would be an understatement, and it doesn’t look like he’s planning on quitting anytime soon. The LA based producer has been absolutely crushing the trap and midtempo ‘twerk’ game as of late, and has shown his producing versatility by dabbling in other genres as well. Expect high energy, a lot of 808 kick drums & a ton of uncontrollable booty shaking.

When it comes to unique sounds, Djemba Djemba is at the absolute head of the pack. In fact, his style is so unique, I can barely come up with words to describe it. Crazy energy and ridiculous synths are at the core of his productions, and if you see anyone standing still during his set, make sure they’re not frozen in place.

Chill future bass vibes are what Tasty Treat bring to the table with their original productions, and it is the combination of these vibes with the San Luis Obispo based duo’s love of turning up that makes their sets jaw droppingly fun. One minute you’ll be in feels-ville and the next you’ll be screaming the lyrics to ‘Mosh Pit’ at the top of your lungs. Don’t pretend like thats not everything you want in a set.

Gotta Dance Dirty head honcho Bones is known for bringing the best techy bass music from all over the world to whatever speakers he is playing on. Bones sets are filled with the purest form of dance music, and something about the way he composes them gives listeners the ability to keep dancing for hours and hours on end. While his sets generally feature 4 to the floor beats throughout, they are about as diverse and distinctive as anyone in the business. If you are looking to wear through a pair of dancing shoes, Bones’ set is one you cannot miss.