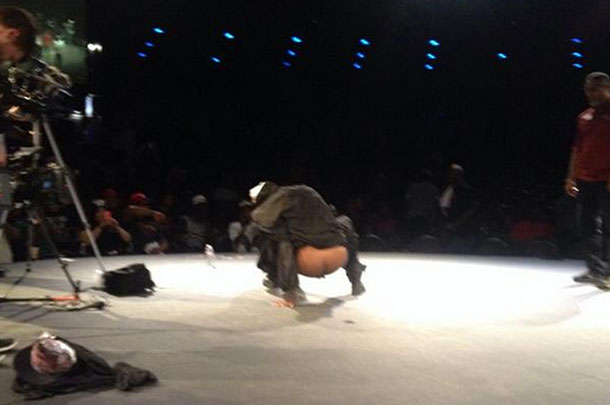 Things got pretty strange during Daylyt’s battle rap matchup against Real Deal in Phoenix over the weekend. According to BattleRap, the emcee came out dressed in all black, including a cloak covering his head. The fans got quickly tired of his antics and began to boo him on stage.

The booing continue when the emcee removed the top portion of his black cloak to reveal a fake severed head to go along with one of his battle rap lines. As you’d expect, this resulted in more booing.

Daylyt obviously wasn’t happy with the crowd’s reaction and yelled “If I hear two more boos, I’ma boo boo on stage” over the mic. Well, apparently he is really with the shits and after more booing took place, he proceeded to pull his pants down on stage and poop in front of the crowd before being escorted out by security.

Security pulling @daylyt2k14 off this stage before he could shit. He'll get it someday.