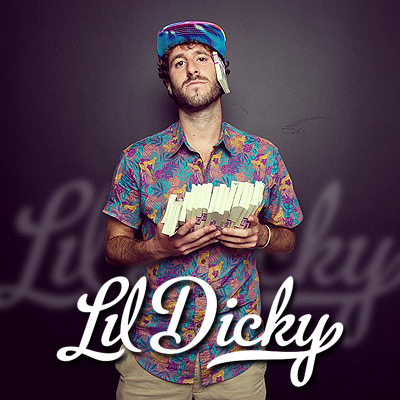 I’m ashamed that it’s taken this long to get David Burd (aka Lil Dicky) his TSS debut. I’ve been a fan since my senior year in college when one of my good friends turned me on to his soundcloud page. Lil Dicky (aka Leftward sloping penis) is the creator of some of the funniest, most original musical content to hit the rap game in the last decade. There is literally no one you can compare him to. His sound and flow are both distinctly unique and his sense of humor is second to none.

General lover of life, women, weed and all things sports, Lil Dicky (aka Firm Handshake) is quickly ascending in the world of Hip Hop. Mostly due to his loyal fan-base and the steady flow of new music he releases every Wednesday (Hump Day). About a year ago he reached out to fans via social media and announced he planned on becoming a full time rapper and was starting a kick-starter online to garner funds to pay for touring, video/audio recording equipment, merchandise and all the things that one needs to begin a career as a professional rapper. Fans took to their pockets and threw money at the kid until he reached his kick-starter goal of $100K. Since then he’s been hard at work killing the game one verse at a time. Not only is he hilarious but he can hit the switch and rap on some serious shit when he feels like it. His mixtape ‘So Hard‘ is one of the best projects you’ve probably never heard of and his youtube is chock full of music videos that will have you fiending for more.

Lemme Freak is the first single off his forthcoming album ‘Professional Rapper.’ The video see’s Lil Dicky (aka Yung Man) outside a club smashing some powdered dougnuts and hailing a cab until he turns his attentions to a gorgeous young female that looks like iCarly’s older sister. Once Dicky turns on the charm that’s a wrap. They’re together for life. Not only is the video A-1 but the beat, lyrics and delivery are all stellar. If you aren’t a fan after watching the video below then just head on over to his youtube channel or soundcloud page and that should alleviate all doubts you have about the kid. If you’ve previously heard about LD then you already know the hype is real. If you haven’t… You’re welcome. Now put one up, kick back and get ready to watch this for the next hour or so. The rap game will never be the same!