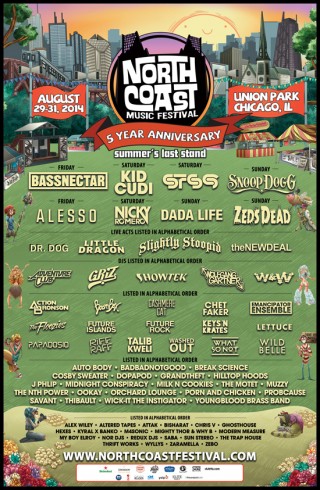 This coming Labor Day weekend marks the 5th year anniversary of North Coast Music festival held at Union Park in Chicago. North Coast has always boasted incredible lineups and this year is no exception.  With such a diverse group of headlining artists, choosing who to see might be a bit difficult. While all of the artists this year are amazing, here is a list with five hidden gems to make this years festival that much better.

The list starts off with What So Not. This Australian duo, one half Flume and the other Emoh Instead, has been making moves this year after recently coming off of The Mothership Tour. What So Not has proven to be an act not to miss out on. They have a unique style of melodic trap that brings the feels but will have you moving your feet as well.  If you are looking for an upbeat, vibe filled set with a few unexpected killer tracks then this will be the show for you. Both of these guys are great individual artists, so you can only imagine what they will be like together.

Second on the list is MuzzY. If you are a fan of groovy funk filled electronic music then you have to check MuzzY out.  This Detroit producer does a great job of combining the aspects of Motown and Hip Hop which is probably described best as “Soul-Hop”.  He is also GRiZ’s right hand man on stage playing the guitar, so you know he’s got the chops for some awesome tunes.  Be sure to check out his set for some good vibes and even better music.

Third is Milk N Cookies. Being from Chicago, I have had the pleasure of seeing them numerous times and I have never been disappointed. They are great at reading any crowd and definitely know how to control a dance floor. Everything from deep house to progressive and electro, Milk N Cookies are extremely diverse in their sets.  With enormous success from their “Animals” remix and even more recent Iggy Azalea remix, these twins are about to blow up.

Fourth is Ookay.  This young trap producer from San Diego has been doing huge things lately. Ookay is part of Buygore and also has done work with big names like Showtek(who will also be at North Coast). He has been a DJ for over six years and let me just say, HE THROWS DOWN. If his set at Spring Awakening is any indication of how his will be at North Coast, make sure Ookay is on your do not miss list. If you’re lucky you might even catch this during his set.

Rounding out the list is Wick-It The Instigator. Wick-It The Instigator has a unique style in his productions using his knowledge of both hip hop and dubstep to create nothing like you have heard before. This incredible producer creates everything from filthy dubstep to intricate trap and even sick remixes. If you haven’t heard the Johnny Cash remix or “Beatles vs Beastie Boys” tribute I suggest you give them both a listen.  This set will definitely be filled with the heaviest synths and the dopest rap, definitely not one to miss.

Grab your tickets here. Three day passes are still on sale and single day tickets are coming out soon.