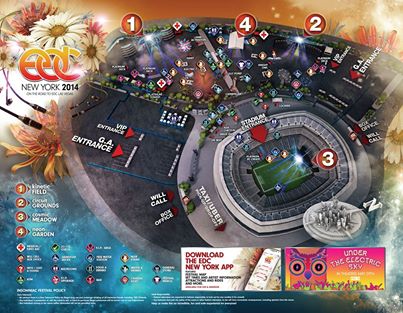 The weekend is upon us, and for two days the magic of EDC will be brought to Metlife Stadium, and New York will be under the electric sky. As the two day festival draws upon us, we wanted to highlight just a few performers this weekend that you must see.

Now that ‘Satisfy’ is out, and more music looms on the horizon, Nero are gearing up for a summer on the road. With only a handful of festival appearances this summer, Nero are one of the performances we’ll be checking out this weekend.

The UK live band Rudimental will be at EDC New York this weekend as the only live act of the entire weekend. Their eclectic performance consists of live drums, keyboard, vocals and is an all around experience. They’ve been touring with Ellie Goulding quite recently, and their debut album Home, continues to be a favorite of fans all over the world.

Bassnectar:
With his next album, Noise vs. Beauty, due in the next month, Bassnectar is back from his winter hibernation in the studio. Without a doubt Bassnectar’s mind-melting set this weekend is sure to contain plenty of new material for the dedicated bassheads.

Destructo:
In a two day festival, it’s easy to slip into the trap of not exploring diversity. While Destructo is no stranger to the festival crowds, the HARD Events owner is set to be doing something special this weekend. V-Squared Labs, the makers of Krewella’s volcano stage and Skrillex’s cell are putting together a surprise. Be sure to catch Destructo’s set at EDC this weekend.

Steve Angello:
Last but certainly not least is Steve Angello, the man behind SIZE Records. With the recent hit ‘Payback’ and his album Wild Youth due out this summer, Angello is the definition of taste-maker. Be sure to check out his set at the mainstage this weekend and get ready.