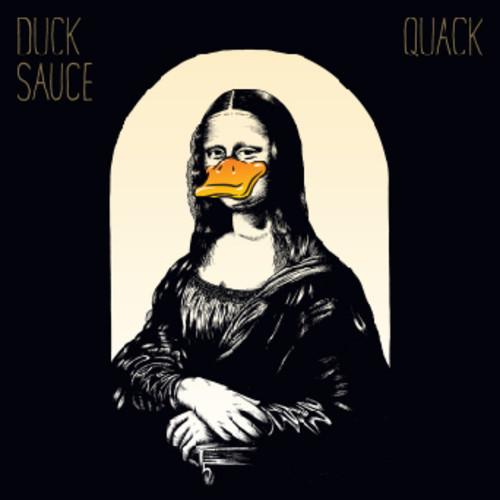 “Quack is Back.” Yes, that’s right- the genius house duo Duck Sauce is back and making waves in the EDM scene. A-Trak and Armand Van Helden (the two brilliant minds behind the chart smashing hit “Barbra Streisand”) have worked their magic and have gifted us with an “electro-chemical fusion of techno-funky beats and vinyl scratching ” in their first full length studio album.

Known for their comical side, the duo hasn’t shied from bringing back the fun. Their intellectual and sometimes indescribable interludes between each track make for a good laugh and step up the listening experience to 110%.

Duck Sauce debuted multiple tracks off the forthcoming album during their closing set at Coachella last week; hyping fans for 12 astonishing tracks. Just days after their live performance “Quack” has stolen the the No.1 electronic album on iTunes for the USA.

I’ve had a few days with the album and I’m here to “educkate” you. On completion you will be well cultured in “duckology 101”.

1. Chariots of the Gods (feat. Rockets)

Starting off with somewhat of an alternative house instrumental, it’s sample filled and topped off with real, yes real vinyl scratching. You have to give it to the two, they are legends and masters of the art; how many other DJ’s do you see scratching during their Coachella set, not many!

Don’t expect to see anyone sitting around on their buts when a song as darn catchy as this comes on. Seriously, the trumpets in this latch onto you like a python to its pray; it will never let go. Quite frankly I’m happy with that and I’ll dance to this until the “break of dawn”, just watch me!

Right out of the wazoo; the only way I know to describe this one. Released last year along with an bizarre barber shop music video, it’s a wacky kazoo induced retake on Alan Sanchez and Bruce Patch’s 1950’s doo-wop song. Scattered with other ludicrous sounds and vocal chopping it’s undoubtedly a unique track. Don’t get me wrong, this has to be one of the more danceable songs on the album.

Do you remember the green and orange centre labels on those old things called LP’s, yeah…nah? Well that is the mark of the legendary Atlantic Records. One of their hits “Good to me” by Euro-Disco group THP Orchestra has found themselves paralleled onto “Quack”. Good, thats all this is, I have nothing bad to say about this song; listen to the original you’ll know what I mean.

UK punk to pub anthem; you’re sure to be singing this next time your down for a pint with the mates, probably along with “Tubthumping” and “Bliss 2011”. Man, that twangy sloppy bass; is it weird I find that arousing? Oh yeah, the trumpets are back too. If what you’re looking for is more of a club pumper, the Bingo players have you back on that, with their electro remix. I’ll stick with the original though. BTW did I mention that bass?

This isn’t new Duck Sauce, in fact it was their entrance into the world of EDM! Released back in 2009 it has influenced the direction for the rest of the album. Sporting vibrant horns, saucy, yes saucy guitars and a kicking bass line, this track will take you right back to the 70’s. Don’t forget to thank Final Edition for the original while your there. This is and forever will remain the best of Duck Sauce; the oldies are always the goodies.

Isn’t the name of a bike? Nope just a high spirited re-boot of Melissa Manchester’s single “Energy”, well of the chorus and leading melody anyway. Non-surprisingly A-Trak and his counterpart have electrified the 80’s rock anthem beyond anyones expectations; when don’t they deliver? Big names Skillex and Kill The Noise noticed it thats for sure; you have most likely heard their grungy deep house remix. I just wish Skril had left the original vocal in, twas absolutely quackers. “You live it, I love it, Energy”.

In My opinion “Everyone” is the stand out track on the album. Featuring Teddy Toothpick (who sounds uncannily like Dave 1 from Chromeo) on lead vocals and a strong bass line it has a special characteristic about which isn’t shared by the rest of the album. Taking a sexy groove, some magical synths and pairing it with Dave’s silky voice, Duck Sauce have made a sensation for the ears garnished with a bit of Chromeo panache. In case you didn’t know A-Trak and

So this song reminds me of a classic ABBA hit, a Madonna song too, if you know what song you were well schooled. “Ring Me” is actually sampled from a 80’s song by disco group A La Carte. Flaunting strong piano riffs and master turntablism, this track really shows how well A-Trak & Armand are connected to their musical backgrounds and influences.

This song needs no introduction, the chart wrecking hit that took No.1 position in Belgium, Poland, the Netherlands, Austria, Switzerland, Finland and Norway and won best dance recording at the 54th Annual Grammy Awards; this if any is the song that made Duck Sauce. You couldn’t go anywhere without hearing it and now its back to haunt us. In all seriousness, it’s a great nu-disco track and with the newly added vocoders it’s sounding refreshws and revitalised.

“Bang it!” Yes, exactly what you want to do all night when this song starts playing aloud. Well at least until 1:15; someone decided to stop the record and spin it by hand. For over a minute there is a choppy vocal build up, which would be great for DJ’s, but as it stands on the album I’m not so sure how well it works. None the less, the Ducks have livened up the Time Bandit’s 1982 boogie hit “Live It Up”, and dare I say it, turned it into a modern house banger.

Spicy guitar licks and provoking chords plus probably the easiest 2 lined vocals ever. What I want to know is how such an upbeat and full of life song can slam into that fading guitar riff? I don’t know, but dam it sounds good; it weirdly leaves a sense of nostalgia, only recoverable by starting from the top. Tis the perfect way to leave the album behind.

So thats “Quack” in a nutsh…NO, in an eggshell! The talented duo have exhibited the finest from the past and have now cleansed the pallet with the new. The primordial egg has cracked and what lies inside is out for all so see.

“Quack” is well worth your time and money; it’s a top not production from two top notch producers.

It is a shame that “Big Bad Wolf” isn’t on the album, but I guess eggs are best by the dozen!