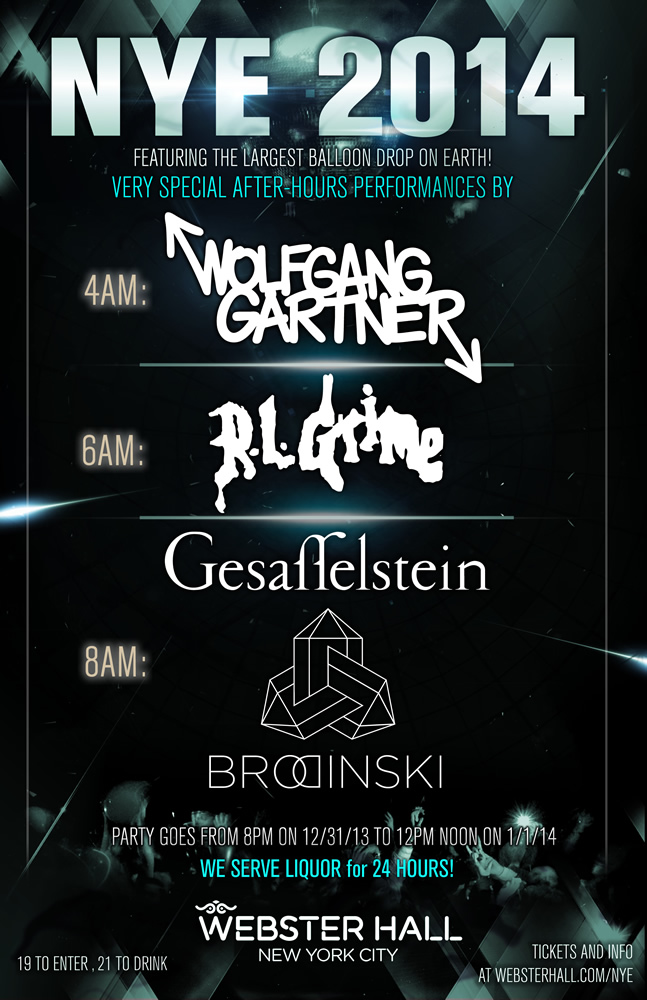 We all know New York City is the place to be on New Year’s Eve but it seems like this year is going to be something special! As if deciding where you are going to close out 2013 wasn’t hard enough, Webster Hall announced their lineup for Webster Hall’s New Year’s Eve Ball After-Hours. This lineup includes Brodinski, Gessafelstein, R.L. Grime and Wolfgang Gartner, that’s an extremely impressive lineup for a party that runs from 3:30am until NOON New Year’s Day. BUT it was just released that the one and only R.L. Grime will be attending this one of a kind Webster Hall’s New Year’s Eve Ball that will run from 8pm though noon New Year’s day. There will be a champagne toast at midnight and over 100,000 balloons will fall from the sky once the clock strikes midnight. Not to mention liquor will be served for 24 hours.

Wolfgang at 4AM, R.L. Grime at 6AM, Gessafelstein & Brodinski at 8AM

There a tickets still available and that includes all ticket packages that include VIP and open bar. Tickets can be purchased and all additional information can be found here. Webster Hall is going to be the place to be to ring in the New Year; it’s simply a party you don’t want to miss. If you don’t want to take my word for it I included last year’s party featuring Tommy Trash below, we hope to see you there.