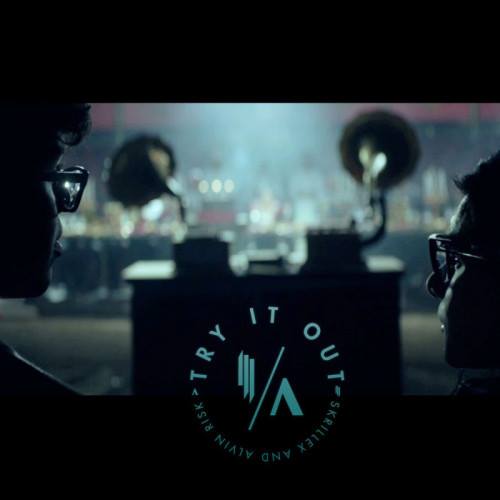 Having taken the last year or so to really focus on his record label and side project Dog Blood, it is overwhelmingly awesome to see Skrillex back in action. Taking his return as a chance to highlight one of his good friends, Sonny collaborates with Alvin Risk to create ‘Try It Out’. While anyone who’s been lucky enough to catch Alvin or Skrillex live over the past year has likely heard the track, they actually created several versions of this one.

If you missed his announcement last week, Skrillex will also be playing a series of club shows this fall in the US (w/ Bro Safari, Valentino Kahn) and Europe (w/ Jack Beats, 12th Planet, KOAN Sound)!

For all intents and purposes, the “neon mix” is being treated as the original mix here. While it’s clear that Sonny and Alvin went through countless versions of the song before having to narrow it down, we’re not complaining when we’re getting three killer versions of a song like this.

The “try harder” mix is pretty self explanatory, in this remix everything is that bit more powerful. Changing up the drop, Alvin and Skrillex completely change the drop, making it so much more aggressive and bass driven. The big difference in this mix is the more emphasis put on off beats. The high screeches and stabs on this track combined with the raw power in the low end shows us just how much business is meant on this one.

So we got to hear the Neon and Try Harder mixes last week, but what we didn’t get to hear is the Put ‘Em Up mix. In my opinion, this is the best mix out of all 3. I think they saved this one for last because they knew this was their best piece. It combines your classic Skrillex noises with the new sounds that him and Alvin have been working on as well. Sonny is making a massive statement with these tracks!