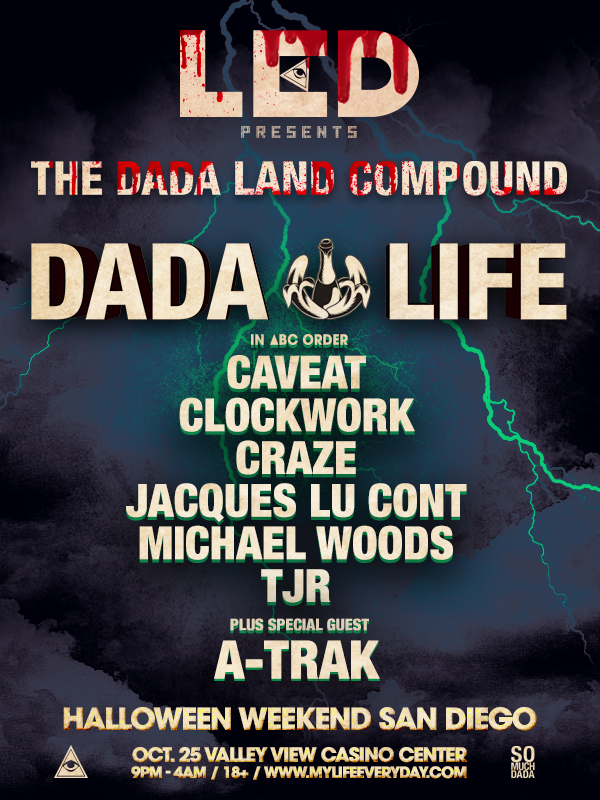 LED is throwing a wicked show in San Diego on October 25 and just in time to celebrate Halloween. Bringing to the Valley View Casino Center is the LED presents Dada Land Compound featuring; Dada Life, A-trak, Clockwork, DJ Craze, TJR and more! I don’t know about you, but this lineup has me going bananas… and what better way to show you’re excitement than participating in a banana bomber photo contest for your chance to win a pretty sweet ass prize.The rules? You take a pic/vid of you in a banana contest or with a banana(i.e. photo bombing a pic with a banana in tow) and then hashtag it #BananaBomber. It goes to twitter or instagram and on October 18 where Dada Land and the LED crew will judge the submissions.

The Prize: There will be 2 winners who each get: a meet & greet with the Dada Compound artists(just the winner not their guest),4 GA passes, $50 Uber credit, a LED sweatshirt & t-shirt and 2 tix to an upcoming LED show of their choosing. All in all this is a pretty insane package.

In addition to that crazy giveaway, TSS has also been given the opportunity to give away two tickets as well. So go bananas and join the craze because this is going to be one show you don’t want to miss