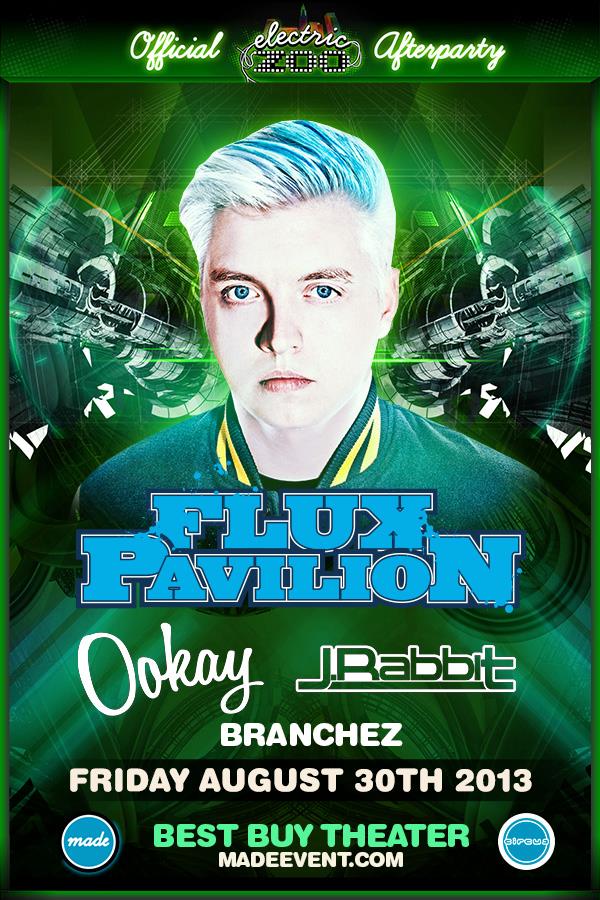 As if the first day of Electric Zoo wasn’t crazy enough, it was time we ventured off to The Best Buy Theatre for some post festival turn up. Flux Pavilion, who had the best set on the main stage from day 1, was the headliner for the event and the opener was the insanely energized Ookay!

Jessika: Since I’m from California it was nice to have a little piece of home with me when Ookay stepped up to the stage. I had recently had the listening pleasure to seen him play at Avalon b2b with Kennedy Jones and couldn’t wait to see the madness that I knew was about to occur. Ookay absolutely murdered his set playing everything from his collab with Showtek to playing his remix Steve Aoki, Chris Lake ,Tujamo’s “Boneless,” (which drops today on Ultra.) The crowd responded with pure insanity as he dropped each track- making the turn up so real for New York that night.

Josh: After Ookay’s insane set, the crowd was ready for some bass filled fun with the legend known as Flux Pavilion. As we said earlier, Flux had the best set of the day at the festival. He took the main stage to a whole new level and absolutely shattered the dance floor. But now it was time for one of his illustrious after party sets. Of course, he packed in some of the classics such as ‘Gold Dust’ and ‘I Can’t Stop,’ but Flux also raised the bar and played a ton of new tracks. If I remember correctly, he featured about 3 new songs off his forthcoming EP (which is set to drop this October) and they were all beautiful pieces of music. The new tracks keep Flux’s signature sound but also really elaborate on pure music. A sold out Best Buy Theatre was caught by total surprise when he laid his new beats down and they were not disappointed either. I remember staring in amazement at what I was witnessing. Truly the perfect way to close out day 1.