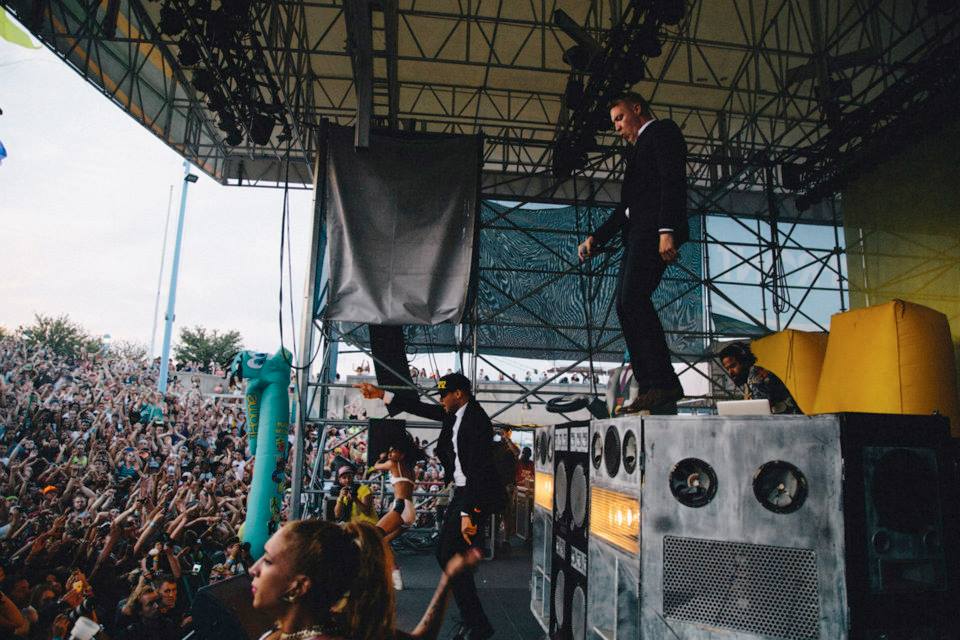 First off, I need to get this off my chest….Philly can fucking party! I’ve never seen anything like it before, I had no idea what to expect but DAMN Philly, do you. Ok time to get serious and breakdown what was undoubtedly the most wild Block Party that Mad Decent has ever thrown.

I decided to make the voyage from Boston to Philly with a friend to get down and dirty in the city of brotherly love with some of Mad Decent’s finest. On my list of people to see for the day was: Dirty South Joe, Nadastrom, Flosstradamus, Dillon Francis and of course, Major Lazer! Everyone had absolutley amazing sets and I couldn’t have asked for a better time.

We got to Penn’s Landing around 4 pm just in time to see Nadastrom. We were running a little behind but it turned out to work in our favor in the end. My initial reaction to seeing the venue was “Yup…this is a block party alright.” Penn’s Landing is located right on the water with the back of the stage facing it. So when you look out from the top of Penn’s landing you see the stage and the beautiful Philly scenery behind it.

We started to walk around a little and got to know our surroundings, grab a few drinks and take everything in. We had no troubles getting back stage where we ran into Diplo, Dillon and everyone else set to perform. The day was starting off perfect but it was only just the beginning.

I was most excited to see Nadastrom mainly because 1. I love Moombahton and 2. I had never seen them before. Everyone on the list I had already seen but this was my first live dosage of God Father of Moombahton. I was overly impressed with the way they got the crowd going crazy for it being so early in the day. Not only that but they had to play even longer because Riff Raff was late for his set. Right off the bat I knew this wasn’t going to be any ordinary Block Party.

After enduring Riff Raff’s set where he dropped one song I was a fan of, Dolce and Gabanna (Produced by Carnage), it was time for Flosstradmaus. Now, I had just seen this Trap god duo a few weeks prior at Bisco, but I only caught the last part of their set so I was stoked to see what they had in store. The only way I can possibly describe their set is: Energy. Pure, energy. They really just know how to party and get a crowd going buck wild. They dropped all their classic tunes such as CRWD CNTRL, Original Don Remix, Piss Test and even some new unreleased tunes that we have to look forward to. They were the perfect set up for DJ Hanzel…I mean Dillon Francis, sorry.

Coming out in his typical suit and tie with his blow up Cats by his side, Dillon Francis was about to absolutely rock Penn’s Landing. This would be the 6th time I’ve seen Dillon in 2013 and for some reason he just gets better and better each time. He played an astounding variety of his old songs and his new songs. One of my all time favorite songs is Brazzers and as soon as I heard that coming on I went nuts and so did every single raver there. Dillon drew in a very large crowd as the amphitheater started to get jam packed for the premier act…MAJOR LAZER!

So, if you’ve never seen Major Lazer live then you basically haven’t lived yet. They aren’t just a DJ set, they are pure uncensored fun. Walshy, Jillionaire and Diplo do a phenomenal job of not only bringing you amazing music but they put on a performance you will never forget. From rolling around on top of the crowd in a hamster ball to getting everyone naked to getting twerkaholics on stage, Major Lazer is the best party there is. They even dropped some new tunes that we should be receiving this fall! As expected the crowd was at its highest point during ML’s set, but I didn’t think it would get quite as rowdy as it did. Standing near the top of Penn’s Landing, watching the crowd go insane as the fireworks started to go off, I couldn’t help but smile and take in all the amazing things that music has brought to my life. It was such a cool moment to be a part of.

There you have it, MDBP Philly in a nutshell. Not only did I get to witness how Philly gets down, but I also got to meet some of our amazing fans and followers which to me is always so cool and humbling. We really do appreciate all the love and support we get from you guys so thank you for coming out and making MDBP extra special.