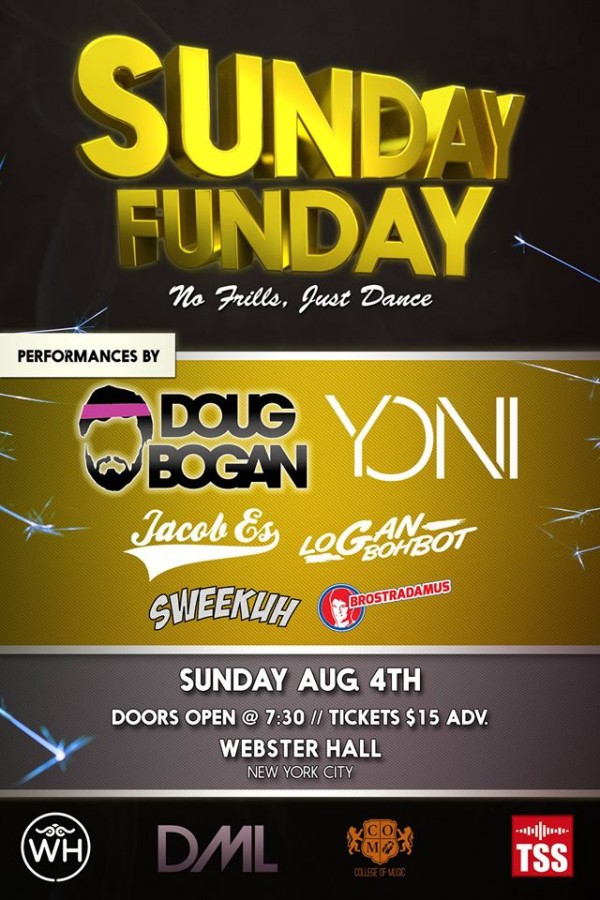 We’ve got a pretty sweet show to share with those of you in the NYC area tonight. On Sunday August 4th, Doug Bogan, Yoni, Jacob Es, Sweekuh, Logan Bohbot, and Brostradamus will be taking over Webster Hall and throwing down a crazy show. Doug, who goes to school with me and whose awesome mashup we posted recently, does a show like this every summer, and from what I’ve heard, its always been an absolute blast. This is (I think) the first show we at TSS have sponsored in NYC, so we want to see all you guys who are in the area out in force! If you haven’t checked out the rest of the guys playing the show, they’re all pretty dope. Last month, we posted Sweekuh’s remix of ‘Sweet Nothing’, which is awesome, and you can check out Jacob Es, Yoni, Logan Bohbot, and Brostradamus on their respective Soundcloud pages. Everyone involved is pretty dope, and we’re stoked to be involved in this show. The Facebook event is here, and you can buy tickets in advance here, which you should definitely do because they’re cheaper than at the door and there’s a group discount if you have 10+ people going. Overall, its going to be an awesome time and I hope that as many of you guys as possible come out and support all these great DJs.