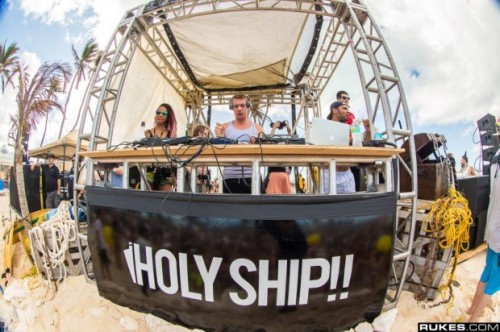 This time around, HOLY SHIP!!! takes place aboard a new ship, the MSC Divina, embarking in Miami, FL. Over 40 of the world’s top DJs will perform among multiple venues aboard into the late hours over three consecutive days and nights at sea. Beyond the music, the MSC Divina is the newest ship in the MSC fleet and one class larger than MSC Poesia, which hosted HOLY SHIP! in 2012 and HOLY SHIP!! in 2013. HOLY SHIP!!! delivers on every level, and with the stellar line-up of DJs and artists the event is known for, this new ship and departure from the PortMiami will continue taking this unique experience to new heights. The voyage will also be marked by the signature onboard activities and workshops with intimate artist involvement HOLY SHIP!!! is known for (details to be announced at a later time). In addition, HOLY SHIP!!! will host not one, but two private island beach parties, which are always fan favorites (exact details TBA).

The complete line-up for HOLY SHIP!!! is: