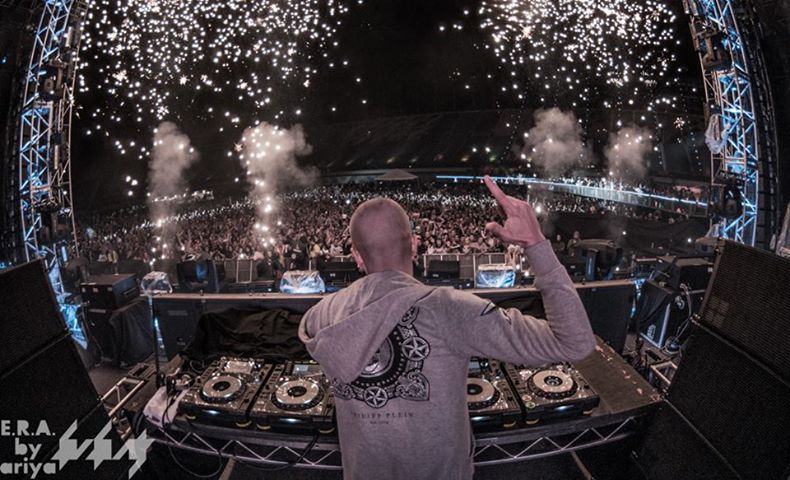 So we here at ThisSongSlaps.com decided to make an artist spotlight series for artists we think you should check out this year if you attending EDC Las Vegas. We plan to upload a new spotlight every couple days leading up to the big sold out festival taking place June 21, 22nd , and 23rd at the Las Vegas Motor Speedway. Now, first on the list we have… Headhunterz.

Headhunterz (Willem Rebergen, 27) is a Hardstyle DJ and producer from The Netherlands. He is currently ranked the #1 Hardstyle DJ in the world and sits at #11 in the Top 100 on DJ MAG right below Skrillex and above Swedish House Mafia. Willem, who recently signed a deal with the leading dance record label in the world, ‘Ultra Music’ , has been quickly blowing up here in the US but don’t be mistaken as he is already recognized at a large scale outside of the country which is what has allowed him to rank high in charts but he is quickly making a name for himself within the american crowd now. Just recently he took over the main stages at both EDC’s Chicago and New York stops in where he closed off the event on both occasions and had the crowd rocking to a faster, much harder, style of music that many here aren’t use to but seem to be enjoying something new. He in addition already has played the Electric Daisy Carnival in Las Vegas where last year he had a set at the Q-Dance stage which was fully packed during his opening.

He has had a huge number of releases but recently has seem to be going on a more melodic and festival style that seems to have captured a even more larger crowd’s attention. One notable release, being his remix for none other than Kaskade and his ‘Lessons In Love’ which has been used in Kaskade’s set as the breakdown portion of the track and has over 4.5 million views on YouTube along with his remix for Hardwell’s ‘Spaceman’ which is being played by Hardwell himself, Porter Robinson, and other big names. He is due to release an announced EP on Ultra Music soon which he has lately been premiering new music that we believe could be part of the project which includes a new collaboration between him and well known trio Krewella, that really just makes it obvious that Headhunterz is on his way to leave his mark within the states now with his music and doesn’t plan on stopping his growth any time soon.

Headhunterz is expected to take over the main stage this year at EDC Las Vegas in which we believe that he will have the closing set during one of the 3 nights and in addition be playing the ‘Basscon’ stage at some point during the festival as well.

We highly recommend going and checking him out as he will be bringing a newer sound to our scene here in the states that we consider to be full of energy and fun which overall we expect to be a great set that will have the crowd dancing and screaming for more. We leave you with his latest episode to his podcast ‘ Hard With Style’ for a taste of what you can expect at EDC which you can play via our site player.